"Better three hours too soon, than one minute too late". That quote is attributed to William Shakespeare who lived in an age without computers. Today time is essential for many programs and functions of the computer. This starts with applications who might throw an error message if the time is not precise on a computer but could also lead to lost auctions on eBay because you went there to late. Or think about business decisions like buying or selling stock, sometimes every second counts.

The portable desktop atomic clock software is compatible to most versions and editions of Windows including Windows Vista and can be used to sync the computer time with just two mouse clicks. 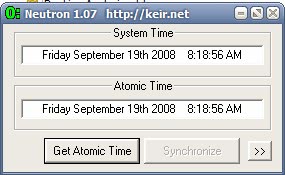 After starting Neutron it displays the current system time. A click on Get Atomic Time will fetch the system time of the default Internet time server and display it in the program interface.

Clicking the synchronize button will sync the time of the Internet server with the system time. A click on the << symbol in the program interface opens the options which provide access to other Internet time servers which can be selected so that the system time is synced with them instead. It is also possible to set the option to run Neutron at computer start to sync the time whenever the computer is started.