Favtape has received some news coverage lately and basically everything that can be said has been said about this website where users can share their favorited and bookmarked songs of their Last.fm and Pandora accounts.

Well the service got updated a while ago and is now displaying the top songs of every year from 1901 onwards to 2008. Each year holds hundreds of songs that can be played fully on the website. Talk about an awesome way to discover new music or listen to old classics that you grew up with. 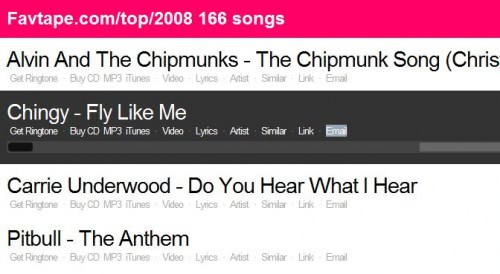 I personally do not use Pandora or Last.fm but still find Favtape pretty useful for the mentioned reason.

You can for instance check up on your friends on Last.fm to see which songs they have been listening to lately or which music they have recently discovered and liked. The site offers music recommendations as well which you may find useful and charts that list the top hyped tracks, artists and loved tracks of a particular week. This is excellent for music discovery, even though you mainly find mainstream acts and songs listed on the page and not the next great artist that no one knows right now.