Video Thumbnails Maker is a sophisticated tool to create thumbnails of videos. It supports a wide range of video formats including but not limited to the popular avi, wmv, mpg, rm, rmvb, flv and mov formats, but also exotic formats like vob, 3gp and mkv. The only requirement is that an appropriate codec is installed on the system to play those files.

This can be checked easily by trying to play the video with Windows Media Player or any other media player that does not use binary codecs. Five output sets are available that define all sorts of parameters like the number of thumbnails per row, the background color and the width and / or height of the thumbnails.

Everything in there can be changed and there is much to explore including several options that I have not mentioned already.

As far as options are concerned, you get to style the time stamp, add a background image of your choosing, a watermark, or add other effects to the output. The program supports different configuration sets that you can switch between easily, for instance one for work that uses watermarks, and one for creative commons content that does not. Several videos can be added to the program queue by either selecting a folder or files from the system. Two output settings exist: the first creates an image for every thumbnail while the second combines all thumbnails into a single image. 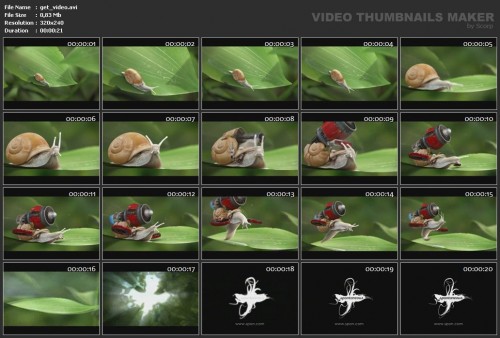 Depending on what you need the thumbnails for, you may prefer one or the other. If you want to distribute thumbnails with the image, for instance as a preview option, then you may want to select the all thumbnails in one image option.

If you need the thumbnail images for a web page on the other hand, you may prefer the other option instead.

The creation process itself is fast and works flawlessly as long as a supported codec is installed. I ran into a bit of problems with several video files because I use SMPlayer as my main video player which uses binary codecs that other applications cannot use. This meant that I received quite a few "failed" messages because of missing codecs.

Installing the missing codec resolves the issue on the other hand. While that means that you will have to find the matching codec, it is not that much of a burden after all as you can automate the process and find the appropriate codec quickly this way.

You can alternatively use Auto Movie Thumbnailer which offers a similar feature set.