Find out which audio or video codec is missing

It can be really frustrating if a movie that you have downloaded for hours won't play on your system. Maybe there is only a black screen visible, or no audio, blurred pictures or out of sync audio and video. The most likely cause for this behavior is that a audio or video codec is missing on your system.

One way to solve this would be to install one of the huge codec packages that probably install the codec that you need but will definitely install many other codecs that you will never need or even cause problems on your system as they may be used instead of the codecs that were being used previously on it.

Codec Installer is a freeware much like G-Spot, Codec Toolbox or Video Inspector that analyzes video files to display which audio and video codecs they require to run properly. A nice feature is the option to download any identified missing codec right from the Codec Installer window saving you the hassle to search for the right and current version of the codec on the Internet. 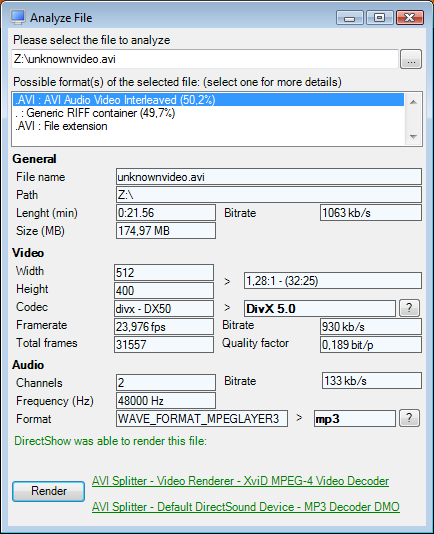 Codec Installer requires the .net framework 2.0 and runs on all Microsoft operating systems starting with Windows 98 including Windows Vista support.

Update: The program has not been updated in some time, the developer site still lists Vista as the latest support operating system which indicates that. While it still works just fine on newer versions, it won't be able to identify newer codecs because of this. It is likely that it will work fine for most videos you throw at it, but for some, it may not display the correct information or information at all.

I suggest you try Video Inspector instead which I have linked above. The program receives regular updates and is a free download as well. A viable alternative is Media Info which is also updated regularly and should work just fine for all video files you have difficulties playing on your system.

For the most part though you can just switch to a media player that supports the majority of codecs out of the box. Try VLC Media Player or SMPlayer for instance for that.