Opera Knew Best All Along

This report by Mashablesâ€™ Paul Glazowski caught my attention whilst reading my feeds the other day. Itâ€™s called, â€™Opera Miniâ€™s Continued Success Rests on Smart Product Placementâ€™ and describes the current success […]

Did you know that you can easily load Greasemonkey scripts into Opera? While Firefox users need an extension for that Opera users can simply import them into Opera. Well, some manual work […]

Use The Opera Mini Browser On A PC

The Opera Mini browser was designed with mobile devices in mind. It compresses the contents before they are send to the device of the user who is running Opera Mini which results […]

I covered an article earlier this month that described changes that could be made to the Firefox configuration in order to save bandwidth. This is extremely useful if you are connected to […]

Opera Link provides a similar option to synchronize data from Opera than Mozilla Weave does for Firefox. I don't want to start a discussion on who was first with that idea because […]

Move the Opera Address Bar to the Top

The default way of displaying the toolbars in Opera might be confusing to users who are used to working with Firefox or Internet Explorer. The bookmarks toolbar and tab bar are located […]

A new version of Gmail was introduced a while ago by Google which added several new features, like color labels, to Gmail. So called Gmail 2 is accessible through a link in […]

Keyboard only navigation in Opera

Opera Dragonfly Alpha has been released by the Opera developer team, rather silently so to speak. The Dragonfly feature is already build in Opera 9.5 beta 2 which can be downloaded from […]

Opera uses the entire screen to show contents of a page and doesn't waste a single pixel on the screen for displaying anything else. This is definitely great for stretching the space […]

Kavin send me an email recently asking me if there was a site for Opera add-ons similar to the highly popular Firefox add-ons website. Yes there is such a website for Opera. […]

Opera and Webkit pass Acid3 test. Does anyone care?

Big news all around the Internet that a nightly build of Webkit and an internal build of Opera have passed the Acid 3 test. Users who favor one of the browsers now […]

Many rumors have emerged when it became public that the Opera team created a website that announced something called Opera Dragonfly without revealing what it really was at that time. The page […]

The Opera team is constantly adding exciting new features to the beta version of the upcoming version of Opera which other web browsers do not support right now. This could give the […]

After installation Opera's default settings show the progress bar which displays information about how the current page is loading in its simplest form - as a small rectangular bar that only appears when a loading process is active. This bar however is not revealing enough information for advanced users who are interested in what exactly is going on when a website refuses to load.

Make use of Opera's chameleonic features

As a proud Opera user, you probably let your browser identify itself as Opera browser by default. Although most websites do work and display more or less properly in Opera, there are still many of them which don't comply with the standards and contain many non-standardized code segments (usually working in IE only) thus confusing the standards-based browsers which leads to improper appearance of the site in the end. 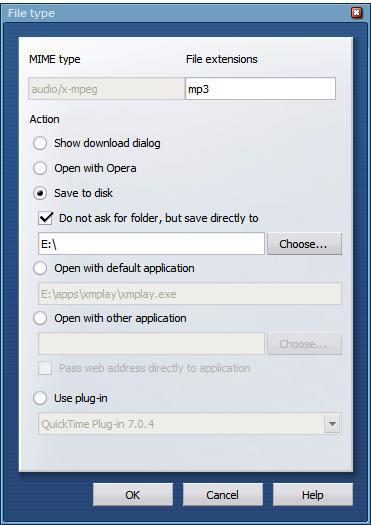 If you do use Opera you might have noticed that Opera seems to always bring up the save to dialog and you have to browse to the download location even if you downloaded a file of the same type just a minute ago. The line "Remember choice and do not show dialog again" is grayed out and can't be checked as well.

The build in Opera popup blocker notifies the user every time that it blocked a popup successfully resulting in a small notification overlay in the top right corner of the screen. While this might be useful under certain circumstances it becomes quickly annoying especially for web savvy users who know their way around the web.

Speed up web browsing by using Nicknames in Opera

A great feature called SpeedDial has been recently added to Opera. It's a solution providing quick access to your "Top 9" websites and it's faster than using Bookmarks. However the limited number of sites that you can add does not make it a universal feature to speed up surfing in general.

OperaTor is a combination of Opera, the anonymization service Tor and Privoxy similar to Foxtor which offers the same functionality for Firefox. I don't want to bore you with a lengthy technical description of how Tor is providing anonymity, just that much: Tor uses a layered approach sending your request through a series of servers that only know the server before and after them. This means that the destination server does not know that you requested the package, it only knows the IP of the server before that made the request.

Let Opera speak to you

Even many experienced Opera users do not know that it is possible to activate the so called "Voice" mode in Opera to use voice commands in Opera and also let Opera read text in websites for you. Before you can use any of the voice features in Opera you need to install the voice add-on package which can be downloaded right from withing Opera. Go to Tools > Preferences and select Voice from the left pane. Click on the button "Enable voice-controlled browsing" and follow the few steps that are self explanatory.

Opera is already a very fast browser, but if you would have the choice between fast and faster than fast, what would you choose ? I took the liberty to compile a list of 10 great tips that speed up Opera in several unique ways. Many of the settings can be changed by simply going to Tools > Preferences in Opera but some can only be used by accessing not so obvious ways like ini files.

Please note that everything that I'm describing here worked fine on my computer. It speed up Opera and increased my browsing experience with it tremendously. While most tips will work for any users no matter their connection to the Internet some tips might only increase performance for broadband users.

Firefox has its extensions, Internet Explorer its plugins and Opera has Widgets. They basically mean the same: addons for your browser of choice that add functionality to it. I don't think that Opera deserves to take the third place in the ongoing browser war, it's fast and resource friendly and many users who rely on Firefox or Internet Explorer should at least take a look at it and evaluate it for themselves. They might be surprised about Opera after all.Widgets for Opera come in all colors and shapes and you can compare them pretty much to the excellent list of extensions that are available for Firefox.

I found a great guide for Opera 9 which extends Opera tremendously. The guide is divided into seven sections: Menu editing, Integrating Opera with download managers, User Javascript, Buttons, Panels, Widgets and Misc. The menu editing section for instance has some great tips that enhance opera in great ways: It gives you tips how to integrate the bugmenot website into opera, it lets you lookup the bugmenot website for login information of the page you are visiting atm. You also find tips for the following things: How to open graphics with an image viewing program like irfanview, how to open websites with internet explorer or firefox, how to create tinyurls for the current url and much more.