Since here at gHacks we seem to be on a bit of a Firefox and Opera theme I thought I’d share a couple of things I have discovered to be useful when using Opera.

When I first began using Opera, only a short time ago with version 9.0 my first reaction to the widget options was that they where useless, and a poor alternative to Firefox extensions.

Since then however I’ve discovered what kind of uses they can actually be very handy for, and although I don’t use them a huge amount, I have a few which I really like.

These include the Screen Ruler, CSS help, Notes and Video Downloader.

No official Del.icio.us integration for Opera? Well that’s fine because thanks to the awesome web panel feature you can easily get a Del.icio.us sidebar with all your recent bookmarks.

Web Panels are a great way to get quick access to regularly used services such as twitter and Facebook. You can access this feature by going to Tools > Appearance > Panels and creating a new web panel. 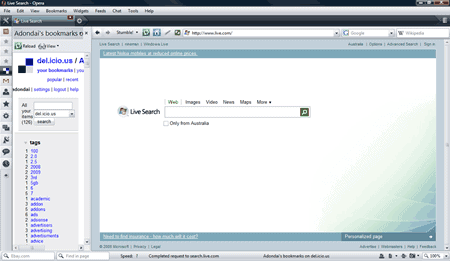 Opera also lets you create custom buttons which gives you the ability to integrate some of the previously mentioned services even more. Fore example StumbleUpon, or Del.icio.us tagging.

A lot has been said about the new Firefox ‘Awesome Bar’, but Opera and Flock both already have similar features, although admittedly Firefox’s wider spacing looks a lot better.

The address bar in Opera can be used to search through your bookmarks and history as Opera will index all the pages you’ve visited. Sometimes I find it not as intuitive as Firefox, but it’s pretty handy nonetheless.

Let me know some of the things you like about Opera.