Firefox Screenshots has been a smash hit for Mozilla; initially launched as the Page Shot experiment as part of the -- now retired -- Firefox Test Pilot program, it was later integrated natively in the Firefox browser.

Screenshots provides Firefox users with a native option to capture webpages. The initial implementation supported uploading screenshots to a Mozilla-operated server for online access and sharing, and local saves.

Mozilla implemented the functionality in a way that was confusing to users as "save" did not save the screenshot to the local system but online on Mozilla's server. Mozilla planned to address this by renaming save to upload. 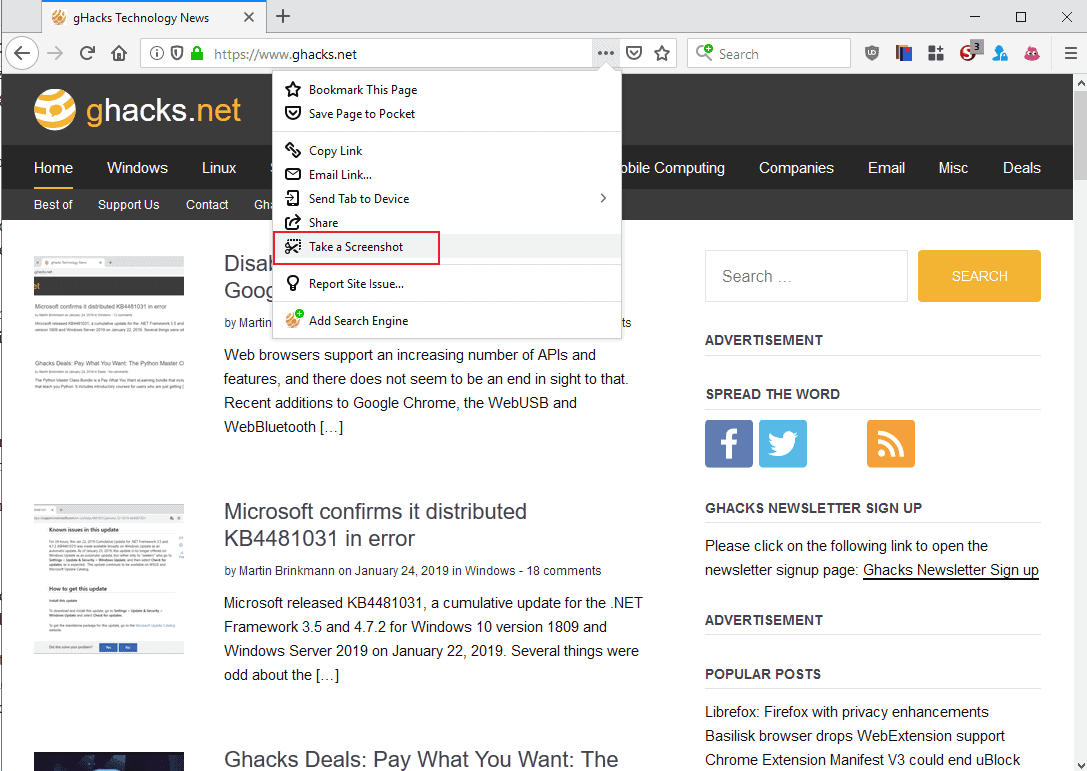 The change won't be necessary anymore going forward, however, as Mozilla revealed that it plans to shut down the upload capabilities of Firefox's screenshot tool.

In other words: starting with Firefox 67, screenshots can only be saved to the local system.

Why is Mozilla making the change?

Mozilla revealed that the local saving option is "considerably more popular" than the upload option. The organization made the decision to remove upload functionality to "offer a simpler user experience".

Mozilla shut down several programs and services in recent time, for instance the, according to Mozilla, very successful Firefox Test Pilot program.

Firefox 67 will roll out to cutting edge Nightly users in February. Firefox Stable users will be upgraded to version 67  in May 2019.

Mozilla plans to integrate new functionality in the screenshot tool; support for keyboard shortcuts and improved previews of screenshots are on the agenda.

The screenshot tool is a popular application in Firefox. I have to admit that I did not use it much; my main reason for that is that I prefer to use a third-party tool -- PicPick if you are interested -- that runs on the desktop for that instead. It gives me better flexibility and does not restrict usage to a single application.

Users who use the screenshot tool but not the upload functionality will like the change as it makes things easier for them and less confusing to new users. Firefox users who used the uploading capabilities on the other hand will have to find another service to upload images to.

I'm not aware of a third-party extension to take screenshots and upload them to a server on the Internet; if you know of any free free to leave a comment below.

Now You: Do you use the screenshot tool? What is your take on the development?

Martin Brinkmann is a journalist from Germany who founded Ghacks Technology News Back in 2005. He is passionate about all things tech and knows the Internet and computers like the back of his hand. You can follow Martin on Facebook or Twitter
View all posts by Martin Brinkmann →
Previous Post: « Firefox will block DLL Injections
Next Post: Firefox 66 with Autoplaying Sound Blocker »