I really like Firefox's Developer Toolbar which, unlike the name implies, is not only useful for developers but also users who like a speedy workflow in the browser. You can use the developer toolbar to manage Firefox add-ons for instance, to quickly enable or disable extensions or plugins in the browser, or to change Firefox preferences which is often faster than doing it on the about:config page.

The Developer Toolbar has more to offer for regular users of the Firefox web browser. Did you know that you can use it to create screenshots of the browser window? To use the feature in Firefox do the following:

Screenshots are automatically saved as png files on the system. The basic command takes a screenshot of the visible area of the web page displayed in the Firefox web browser. The following optional parameters are available:

A basic command example is screenshot test.png 5 true which takes a full web page screen in five seconds after the command has been issued, and saves the image that is created as test.png in the default download save directory on the local system. You can use tab on the keyboard to use the suggestion that is displayed once you start typing in the Developer Toolbar to speed things up further. 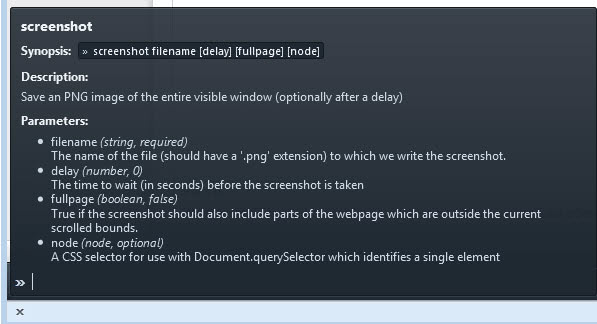 Note that the screenshot will not include the browser's interface but only the actual web page in the screenshot. Using the browser's built-in screenshot tool gives you the opportunity to create screenshots effortlessly without having to install a browser extension or desktop software. Even the system defaults, like using the print key or something like Windows' Snipping Tool, can't be handled as conveniently as this tool.

The screenshot feature is limited on the other hand as I pointed out earlier. You can't take a screenshot of the browser interface, freehand, or of select elements on the page conveniently without digging into the code of the page.

Update: While it did work on my computer to not include the file extension of the output screenshot, other users encountered issues when they tried that.

Update 2: It is apparently only possible to create a full screen screenshot if you select 0 as the delay value. Any other value will result in a partial screenshot. 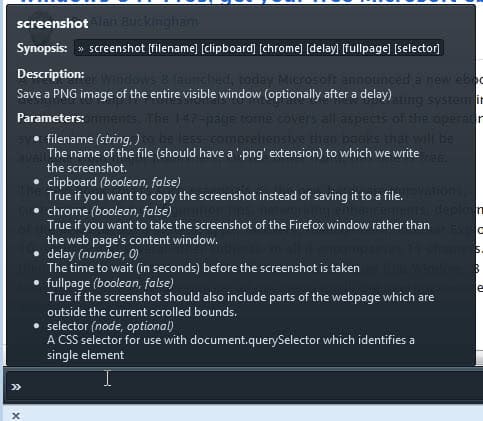 It is now possible to copy the screenshot to the clipboard instead of saving it to the local system, and to include the chrome of the browser in it.

Martin Brinkmann is a journalist from Germany who founded Ghacks Technology News Back in 2005. He is passionate about all things tech and knows the Internet and computers like the back of his hand. You can follow Martin on Facebook or Twitter
View all posts by Martin Brinkmann →
Previous Post: « Firefox 17: old Java and Flash versions are now automatically disabled
Next Post: Edit or remove cookies from Firefox's Developer Toolbar »