In what some will describe as a classic move to gain press attention, Microsoft activated the Surface RT page on the company's own Windows Store website for a moment before pulling the page again from the Internet. It may have been accidental and it is likely that we will never know for sure. What's certain however is that the price revealing is already making the rounds on the Internet.

It is almost certain that the pricing is the real deal, which puts an end to all the speculation and rumors that we had to read through in the four months since Microsoft started to reveal the Surface line of tablet PCs for the first time.

If you want an extra touch cover, you have to pay $119.99 for that separately, and a type cover instead of a touch cover for $129.99. The main difference between touch and type covers, besides the latter only being available in black instead of five colors, is that the touch cover offers physical keys. It is a bit thicker than the touch cover because of this, but also more likely to be of better use to Windows users who type a lot on the PC.

What feels a bit strange is that the top of the line model with 64 Gigabyte is only offered with a touch cover and not without a cover at all. If you want the 64 Gigabyte Surface RT version with a type cover, you have to pay $699 for the device - including a touch cover - and an extra $129.99 for the type color on top of that so that you end up shelling out more than $800 for the device.

If you compare the pricing to Apple, you will notice that Microsoft has selected the same starting price that Apple is asking for its new iPad right now. The $499 on the other hand get you a 16 Gigabyte iPad 3, while the 32 Gigabyte version would set you back an extra $100 on top of that. The Surface RT is shipping with a larger display, 10.6" to 9.7" the iPad ships with, and better connectivity port wise.

Surface RT devices ship with a special version of Microsoft Office, which is another plus. The major downsides, apart from unknowns like the resolution the device supports, is the fledgling store and a bit of uncertainty considering that it is Microsoft's first tablet PC.

I had hopes that Microsoft would start at $399 for the basic Surface RT version but that did not happen unfortunately. Now that you know the pricing, is that changing your perception on the device? Even if you are not interested in it, what do you think about the price? (via The Verge)

Update: The German Microsoft Store is listing the prices for Germany in Euro,which usually is the same across the European Union. 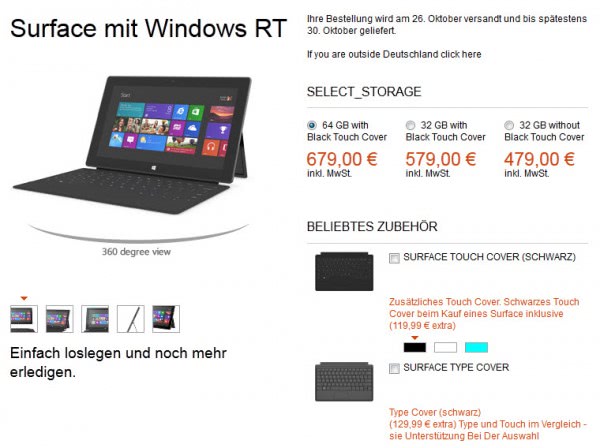 What is interesting is that there are only two alternative covers available instead of the five different touch cover colors that showed up on the US Store.