Google from next week on will add a new ranking signal to its search algorithm that is taking into account a site's copyright removal notices. The signal will be one of over 200 that Google is using to calculate the ranking of any given site in the company's search engine. What this means is that sites may be ranked lower if they receive many removal notices.

When you look around you notice that the majority of authors that have addressed the change make it look like it is a done deal, that sites with many removal requests will be punished by Google. A

While it is certainly likely that some sites will notice negative effects on their rankings from next week on forward, it does not have to be the case for all sites, as other ranking signals may be positive enough to keep the site's rankings in Google Search. 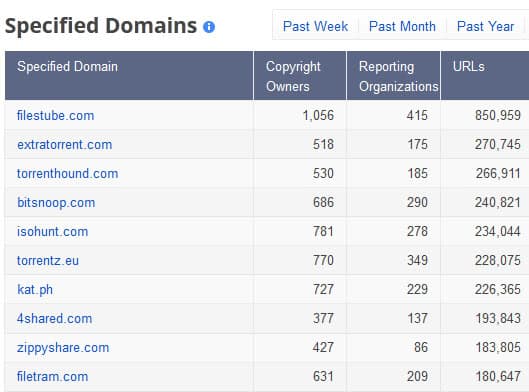 Why is Google implementing the change? According to the news post, to "help users find legitimate, quality sources of content more easily". What Google tries to do is move legitimate sources like Hulu, Spotify or NPR in the focus, and pirate and download sites to the back of the results.

The index remains the same, it is only shuffled around, which some users see as manipulation of results. There is a growing faction that believes that Google is starting to lose its edge over the competition because of changes like this that are not necessarily created to provide the best possible product, but to appease a group of influential companies and organizations.

This is how big companies start to lose their edge. They get distracted from their core mission which is to excel at providing a service to their users. The distractions are small but numerous and ultimately it leads to enough loss of focus to allow a competitor through.

Nobody wants a search engine that isn't neutral. What's next, downranking pages that deal with communism because their ad revenue comes from capitalists?

Google's hegemony is much more vulnerable than Microsoft's or Apple's. If Google offering starts to falter, others will step up and provide the service. There is no lock-in with search engines.

I think Google should concentrate on the real issues, like removing major spam sites and networks, like those people searches that you see everywhere when you search for a person, or sites that display a search for the term that you are looking for instead of results that you were hoping to get.

What's your take on the latest change and Google's state in general?

Martin Brinkmann is a journalist from Germany who founded Ghacks Technology News Back in 2005. He is passionate about all things tech and knows the Internet and computers like the back of his hand. You can follow Martin on Facebook or Twitter
View all posts by Martin Brinkmann →
Previous Post: « Gmail results in Google Search? Nonsense!
Next Post: You can now save your search settings to your Google account »