Mobile users have to keep an eye on the battery level of their device when they use it without connection to a direct power source. If they do not it can happen that the device runs out of power in the least appropriate moment, for instance during a presentation, meeting or when replying to an important email.

Battery indicators are part of nearly every modern operating system. They estimate the time that is left to use the device without power source.

The gadget PwrDrain does something different, which may make it interesting for some users. Instead of displaying the total power left, it shows the current power usage in realtime.

This way, you are informed automatically whenever the power use goes up or down. You can test the workings by increasing the brightness on your laptop, running a demanding Flash game or turning on WiFi.

The Windows gadget has two core uses. It can be used to get an understanding for a device's power requirements. With time, you will know which features and settings increase the power and which reduce it or have no effect on the power use of the device. That's handy to know when you run into situations where you need your device and want to make sure that it runs the maximum available time.

PwrDrain can also be used as an indicator that gives you direct information when power usage goes up. You could then return to the old settings provided that the change is not necessary to work with the system. 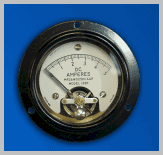 The gadget displays a meter in its interface, power use increases from left to right.

The gadget works on all devices that provide a power meter. While most do, some laptops and mobile devices don't. The gadget won't work on those devices then.

You can find out if the machine has a compatible power meter by going to Control Panel > System and Security > Administrative Tools > Power Meter. If the Add Counters dialog is not empty the device is compatible.

The PwrDrain gadget is compatible with Vista and Windows 7. It can be downloaded from the official project homepage at Google Code. (via)