Screensavers are not really that useful anymore unless your PC is connected to an old computer monitor. Today's top reason for running screensavers is plain and simple entertainment.

Yes, there are users out there who believe that it is still necessary to run screensavers to protect the computer monitor but that's probably not the main reason these days.

If you type in screensavers or a similar search term you end up with millions of websites that offer screensavers, some of them even malicious in nature.

It is possible to use a program like Flash Forge to create screensavers instead of searching for and downloading them on the Internet. Flash Forge can turn Flash files, those with the swf extension, into screensavers with just a few mouse clicks. 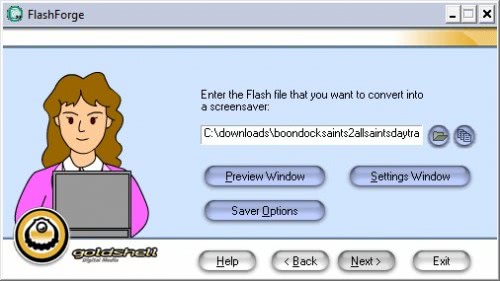 The program will convert the flash file that is being supplied by the user into an executable that will install the screensaver when executed. The user has the option to add multiple files to the screensaver, e.g. to add multiple movies that are played after each other. The installation program can be compressed to reduce the size of it which is useful if web distribution or network distribution is an issue.

Actions after the installation can be defined to show a readme file, open the display properties or start the screensaver automatically. Many users might probably want to turn Flash videos that they have downloaded from Youtube or other video sites into screensavers. These files cannot be loaded into the program right away. Conversion services, like the free Media Convert, can turn the flv files into swf format so that they can be loaded into Flash Forge.

The output quality depends largely on the input file. The screensaver creator has been primarily designed with non-interactive content in mind (movies or images) and won't work that well with interactive Flash files like games. Interested users can download Flash Forge from the developer's website. It should be compatible with most versions of Microsoft Windows. It was tested on Windows XP.

Update: The Flash Forge website is no longer available. You can still download the latest version of the program -- released back in September 2009 -- from third-party download sites such as Softpedia.