Url shortening services like Tinyurl have seen an influx since the release of web services like Twitter. Twitter is a prime example as the services limits the amount of characters per message to 160 much like SMS on cell phones. Yes, you can write / send multiple messages but that's not really the same, is it?

If you head over to Twitter and log into your account you most likely will see links of shortening services. While they make links shorter so that you can save chars they also hide the real address of the link which in its extreme can be used to lure users to a website they do not want to visit. This can have serious consequences depending on the location or place the links are accessed: Think of following a link leading to an adult site at work, a link that is trying to install a virus on your system, or other links that you would never visit in first place if you knew where it leads to.

Long URL Please is an Firefox extension that turns urls of shortening services to their original one. It currently supports about 30 different services with more being added regularly. 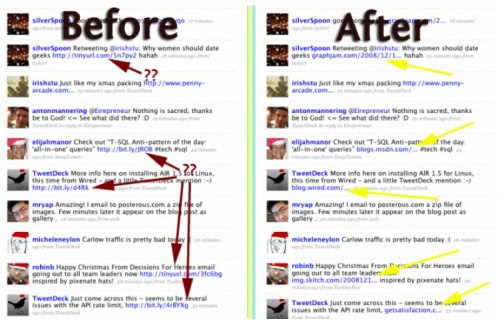 The developers have created a bookmarklet as well which can be used if you work with other web browsers. Some users have claimed that the extension dropped the performance while surfing while others have not experienced it. It might depend on the speed of the computer and Internet connection.

Update: The Firefox extension is no longer experimental. We have also changed the link so that it points directly to the add-on's page on Mozilla's add-ons repository. It uses the api of the longurlplease.com which non-Firefox users can open directly to reveal the destination of short urls.