Making the computer read out text aloud can be useful in several situations. The most obvious is as an aid for blind or visually impaired people, but it can also be helpful if you cannot look at the computer screen all the time.

It utilizes text to speech capabilities of the operating system to provide the means to read out text aloud to the user. It integrates itself nicely in the right-click context menu and can be used to read out all of the text on a website or only the selected text. 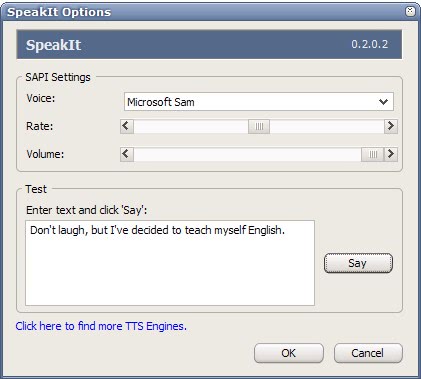 It comes with some options to configure the add-on. It is possible to change the read rate and volume. There is also the possibility to change the text to speech engine if more than one engine is installed on the computer system.

Update: The Text to Speech add-on has been removed from the Firefox add-ons repository. An alternative for the browser is Text to Voice, a popular extension still compatible with the most recent versions of the Firefox web browser. The extension adds an icon to the browser's status bar which you can click on to convert the text to voice.

To use the extension select the text that you want to listen to and click on the icon afterwards. The extension supports male and female voices, as well as several languages including English, Hindi, Spanish, Italian and Portuguese.

You can furthermore download the selected text as an mp3 file to your computer, which can be useful if you want to listen to the text on the go or while offline.

Martin Brinkmann is a journalist from Germany who founded Ghacks Technology News Back in 2005. He is passionate about all things tech and knows the Internet and computers like the back of his hand. You can follow Martin on Facebook or Twitter
View all posts by Martin Brinkmann →
Previous Post: « Photobucket Upload
Next Post: Url Revealer »