Torrent Swapper is a bittorrent client with some interesting features that make it stick out of the crowd of bittorrent clients. First of all it was written in Python making it independent from any operating system. Several other clients offer this as well though and the main feature that distinguishes Torrent Swapper from other clients is the feature to share upload speed between computers.

What this means is that it is possible to upload the same file much faster effecting the download speed as well for trackers that reward users who have higher upload speeds. Next feature that differs is the so called recommendation feature. You click on a torrent and receive possible recommendations that you can download right from the menu.

Several minor features exist as well such as showing the location of all seeders on the world map with detailed information about them, priority queue system, multiple downloads and basically all the important features of a nice bittorrent client. 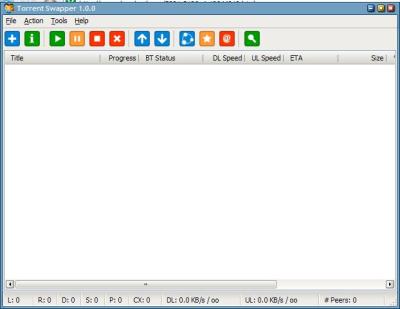 I'm not really sure what the Torrent collecting feature does when you look in the options which is why I did disable it. Other than that it looks pretty solid and is surely worth a look if you are looking for a new bittorrent client.

Update: Torrent Swapper has not been updated in recent time. The last update dates back to 2007 which indicates that the project seems to have been abandoned by its author. It is not recommended to download and use the program anymore because of this. I suggest you download and use a program that is updated regularly instead, like uTorrent or qBittorrent for instance which are both available for download on their project websites.