I'm reviewing a new game as usual each Friday and this time it is Bontago. Bontago is a real time strategy game that can be played against computer or human opponents. Players start evenly on the area and can place blocks to expand their reach from their current position. The task of the game is to encompass all flags that are placed on the level. The initial area of control for a player can be expanded by adding new blocks to the territory under control. The height of the blocks that you can place on top of each others determines how far the influence is expanded.

The laws of physic makes it difficulty to place blocks on each other at the beginning and it takes some time until you get the hang of it. Areas of opponents can overlap which is not a problem in the game. You just need to make sure that you control a continuous area that contains all the flags that have been placed in the world. 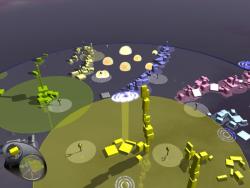 Specialty blocks can be gained by expanding the area around so called gift boxes which will drop special effects blocks which can be used to create volcanoes, earthquakes or rockets.To use them, smash the specialty blocks. Bontago is a fun game especially when you play it against human opponents.

Update: The game can be downloaded from the Digipen University website. Note that a lite and full version of the game is available there. The full version includes music and multiple high resolution backgrounds, while the lite version does not.

You can play the game against a maximum of seven other players. A sandbox editor is available that you can use to train your building skills or just build different structures on the world map.