Finding great flash games is not as easy as it sounds. I found the game The Last Stand at the donation coder blog and was blown away by the gameplay. It looks like your typical shoot all incoming enemies type of games also known as base defender gamers.

At second look it introduces several strategic elements that make every approach different. You have to defend your barricades against Zombies at night and search for better weapons and other survivors at daylight. The goal is to hold out as long as possible and hope that someday a rescue team will come and get you out of this situation. 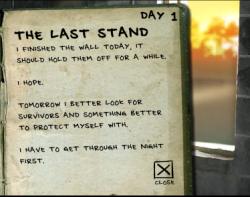 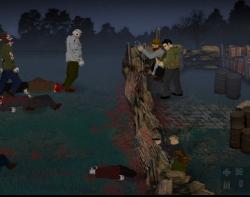 The game begins with the first night. You only have a weak pistol and no other survivors are going to help you. When you manage to survive the attack you can use the next 12 hours to either repair the barricades, search for guns or search for survivors. Repairing the barricades is rather obvious. Whenever a Zombie reaches the barricades he is reducing their health. If the health level reaches zero they are going right at you and you will eventually die.

You do need better guns to survive in this game. It is possible to equip a primary and secondary weapon. Unfortunately for you there is no secondary weapon at the beginning. If you do find other survivors they aid you in the defense and also help repair the barricades. If you are alone you can repair 5% per hour, for every survivor this amount is raised by an additional 5%.

The best strategy would be in my opinion to find a better gun first and search for survivors and more guns on the next days. Repairs should not be necessary at the beginning if you got some experience with this kind of shooters.

I enjoy playing The Last stand. Oh, before I forget. The game is rather violent, not really suitable for children.