Most launcher programs, which we have reviewed, have been easy to use and offered simple shortcuts. If you want a program that can execute advanced commands, while retaining the level of user-friendliness, HotKeyP is worth a closer look. The program is portable, extract the archive and run the executable named "HotkeyP.exe". A new tray icon should appear, clicking on it opens the program's interface; it's divided into two panes which are blank for now. There are many buttons on the right side of the window. Click the Add button to create a new hotkey for your shortcut. A pop-up window appears, and has various options. Define the key combination by using the options at the top. Click inside the text box to place the cursor in it, and then press the keys that you want to assign for your shortcut. You may choose to include one or more of the following keys: Control, Alt, Shift, Win and any other key. For e.g. Ctrl + Shift + Alt + X.

The program also supports the mouse buttons to be used as part of the shortcut combination.

Moving on, the Command field tells HotkeyP what it should do. Click on the ... button to browse for a file or an application's executable, and set it as the target to be opened. For e.g. Firefox, ShareX, a text document, an image, etc.

Alternatively, click on the < button for advanced options. This is where HotkeyP stands apart from other launchers. The System menu has power options like reboot, shutdown, lock, as well as commands to empty the recycle bin, delete temporary files, start or stop services, control panel shortcuts, etc. 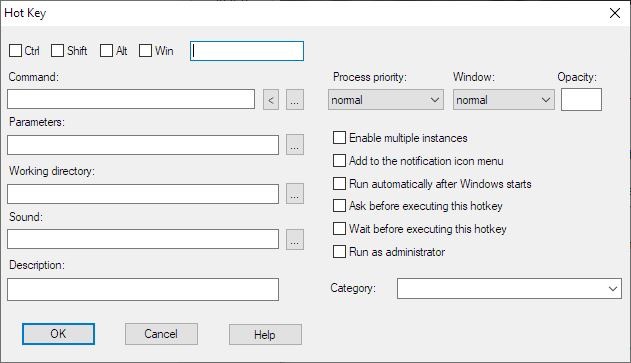 Use the Display menu to set a command that starts the screensaver, turns the display off, switches the wallpaper, enable the magnifier, and more. The Window menu has options to maximize, minimize, stick a window on top, set its transparency, terminate a process, change a process priority among other commands.

Control the volume, eject/play discs with the Multimedia commands menu. The Macro menu allows you to execute custom commands. HotkeyP has its own menu with commands to display its window, disable shortcuts, etc. Though not required, you may choose advanced parameters, the working directory, play a sound when the shortcut is activated. Optionally, enter a description for your shortcut.

HotkeyP can start programs in higher, normal or lower priority, and the window can be started in normal, maximized or minimized modes. It even lets you set the opacity levels, allows multiple instances of the same program, run a program as administrator, run a command automatically when windows starts. If you're a power user, you can organize your shortcuts using various categories that you create.

Hit the OK button to save your new shortcut. It will be listed on the main screen of HotkeyP, try out the hotkey. The Insert option is functionally the same as the "Add" button, but places the newly created shortcut where you selected it, whereas the latter "adds" it to the end of the list. The arrow buttons can be used to re-order the list of shortcuts. Modify a hotkey using the Edit option, or remove it with Delete.

Save your created hotkeys in the .HTK format, and you can import them back if you switch computers or drives.

Note: There is an executable called "Spy.exe" which can be found in the program's folder. Don't let the name worry you, because it is a helper program that you can run from HotKeyP's File menu. It is used to view the process and ID of programs running on the system tray, which you can use to send commands from the launcher to the active window. (Refer to HotkeyP's help file for more information). Honestly, the developer could have gone with a better name for it than Spy.

There is a Win98 version of the program , and it was flagged by some antivirus programs on VirusTotal, it could be due to some issues with how it may work on the old operating system. The main versions, 32-bit and 64-bit are clean. The program's source code is available on SourceForge.