Nvidia has launched the company's GeForce Now game streaming service (it was revealed initially in 2017). It is available in Europe and the United States at the time of writing and available as a free and paid service.

While that sounds awfully lot like Google Stadia, the system that Nvidia envisioned for its service is quite different. Google Stadia customers need to purchase games directly from Google even if they own the game already. Nvidia provides users with access to their digital PC game stores so that owned games can be played without additional costs. 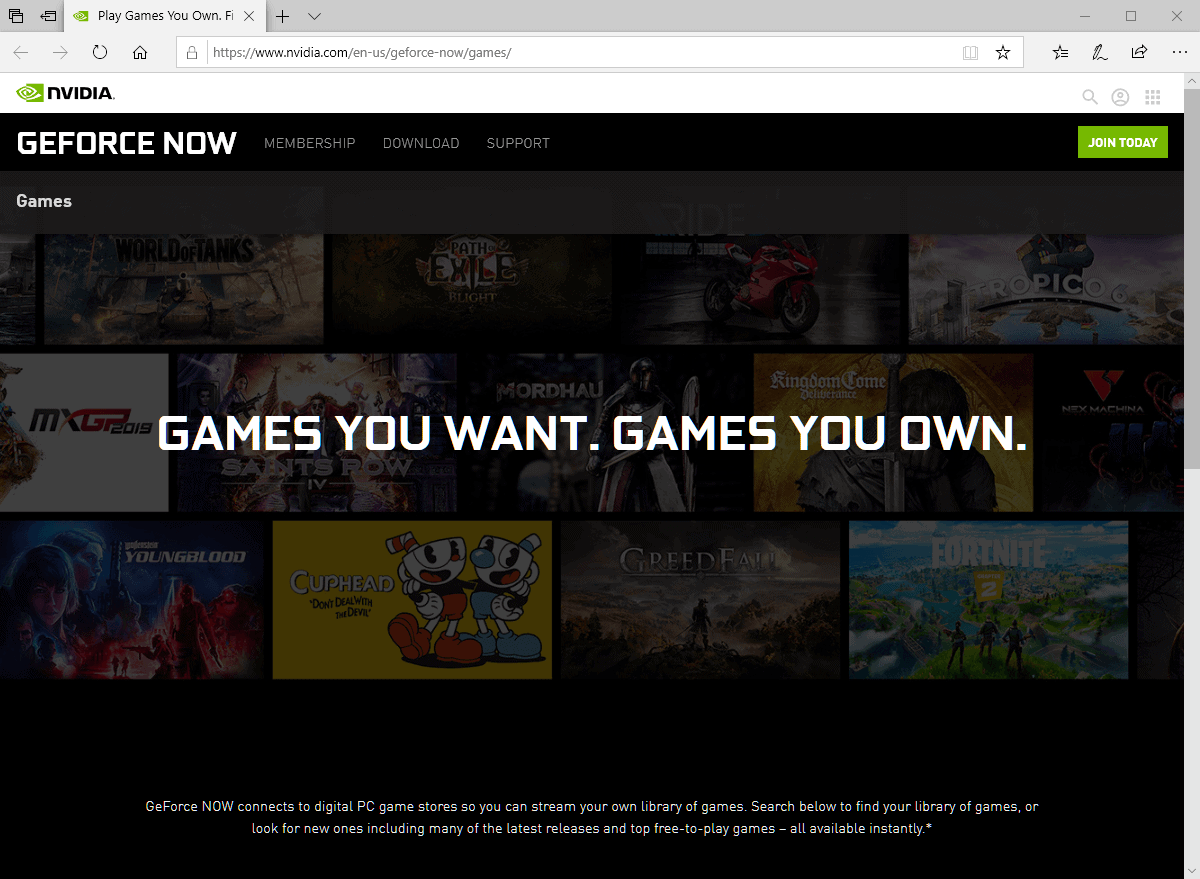 Tip: you can use the game finder to check if GeForce Now supports a particular game. Just type part of the name to list every game that is supported by the service that matches the query. The service comes with a list of 30 free to play games that anyone may start to play right away.

Here are the basics:

GeForce Now is a game streaming service that works on Windows and Mac devices as well as on Android and Shield devices. Mac OS X 10.10 and newer, Windows 7 and newer, and Android 5.0 or later is supported.

All devices require an Internet connection that is capable of streaming at least 15 Mbps for 720p at 60 fps or 25 Mbps for 1080p at 60 fps. Most keyboards, mice and gamepads should work just fine as well.

Nvidia launches GeForce Now with two membership levels. The free level provides standard access and restricts game sessions to one hour. The Founders membership is available for $4.99 per month; it includes priority access, RTX (Raytracing) support, and sessions that can last up to six hours. The first three months act as a free introductory period.

Using GeForce Now is relatively easily. After you have created an account you need to download the app of the service to a device. Existing game libraries may then be linked to GeForce Now so that games owned on these platforms become available. Games need to be installed in the cloud after verification (with the exception of the 30 free to play games that are always available).

Once done, the games may be played right from the GeForce Now library on the device the app runs on.

Compared to Google Stadia, GeForce Now offers the better deal. It is cheaper ($4.99 compared to $9.99) and supports existing game libraries which means that games don't need to be purchased again just to play them using the streaming service.

Stadia does offer some advantages on paper such as support for up to 4K and a lower minimum required bandwidth of 10 Mbps.

The one downside of GeForce Now in my opinion is the maximum session time of 6 hours; this may not affect most gamers but if you play a lot, you will always have to keep an eye on the time to avoid disruption. It is easy enough to start the game again right away, but it may impact immersion.

Now You: what is your take on game streaming services? Would you use such a service?

Martin Brinkmann is a journalist from Germany who founded Ghacks Technology News Back in 2005. He is passionate about all things tech and knows the Internet and computers like the back of his hand. You can follow Martin on Facebook or Twitter
View all posts by Martin Brinkmann →
Previous Post: « Zak McKracken goes looking for hot coffee free game released
Next Post: Steam Search update improves search a lot »