There are two basic requirements for playing games on the PC: your computer needs to have enough processing power to provide you with a satisfactory gaming experience, and if you play multiplayer, your ping should be as low as possible.

If your ping or the ping of fellow gamers is above a certain threshold, you may experience latency issues while playing the game. A too high ping can have other ill-effects, like being kicked off automatically of servers that check player pings regularly to make sure ping's don't exceed a certain threshold, stuttering, frame drops, and other undesirable things.

While games like World of Warcraft or Guild Wars 2 usually do not kick you for high pings, online shooters such as Team Fortress 2, the Call of Duty or Battlefield series often use the functionality to avoid player lag on servers.

Tip: you can monitor latency with a free program such as Network Latency View.

Our article Reduce Gaming Latency (Ping) in Windows provided you with an option to reduce your ping in certain games by making changes to TCP settings of the Windows operating system. It was a technical guide that required making changes to settings in the Windows Registry. Especially gamers who have been experiencing pings of 100ms and above could benefit from those modifications, provided that their connection to the server should be faster than that. If the connection itself takes 100ms, you won't see a difference, but if it should be faster but is not, then you most likely will.

Note: Leatrix Latency Fix is only available for Windows Vista and Windows XP. The application is no longer maintained and should not be run on newer versions of Windows. You can download the last version that was released by the developer with a click on the following link: Leatrix Latency Fix

We have uploaded the version for archiving purposes only and don't support it in any way. 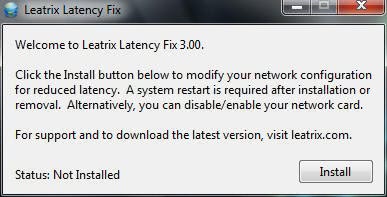 If you do not like to hack the Windows Registry manually, you may prefer a program that does that for you. Leatrix Latency Fix is a free program for the Windows operating system that you can use to apply the changes automatically.

We recommend that you create a backup of the Windows Registry or the entire Windows system before you run the program to make changes to the system.

All you need to do  is to download the latest version of the program, extract the zip file to your local system, and run the program executable afterwards.

The window displays the current status of the installation. A click on install makes the modifications to the computer and changes the status from not installed to installed. Please note that you need to restart the PC after the changes have been made for them to take effect.

On Windows Vista and newer versions of the Windows operating system you may see an UAC prompt when making those changes. You also need administrative rights for the changes to be applied to the system.

Martin Brinkmann is a journalist from Germany who founded Ghacks Technology News Back in 2005. He is passionate about all things tech and knows the Internet and computers like the back of his hand. You can follow Martin on Facebook or Twitter
View all posts by Martin Brinkmann →
Previous Post: « Windows 8: display resource use of apps
Next Post: VSCD Free Video Converter review »