We have heard a lot about browser stats in the past, how Firefox is plateauing, how Chrome is gaining market share and how Internet Explorer is dropping to new lows every month. I thought it would be nice to share some of the site stats with all of you. The stats have been taken directly from Google Analytics, and should hopefully paint a very clear picture of the people that visit the Ghacks technology news website. For comparison reasons, I made the decision to add data from 2009 to the mix. (It is June 2009, and June 2011)

Lets start with browsers, as this is something that is constantly in the news all over the world. Firefox was the number one browser here on Ghacks in 2009, with a share of 49.11%, followed by Microsoft's Internet Explorer with 34,90%, Google Chrome with 6.73%, Safari with 4.02% and Opera with 3.88%.

Things have changed noticeably two years later. Internet Explorer is now the most used browser with a market share of 34.59%, that is only .31% less than two years ago. Firefox dropped significantly from the all time high to 32.14%, a drop of nearly 17% in two year's time. Chrome managed to get market share and is now sitting at 21.01%, an increase of exactly that 17% that Firefox lost. Safari moved up .30 percent, Opera usage dropped to 2.27%, unless Opera Mini is included in the calculation which would add another 2.29% to Opera's market share.

When you look at the different browser versions you see the following distribution:

The most used Mozilla browser on Ghacks in June 2011 was Firefox 4.0.1 with a share of 44.63%, followed by Firefox 5 with 16.07%, Firefox 3.6.17 with 11.25 and Firefox 4.0 with 4.18%. Many users are still using outdated versions of the browser, Firefox 3.6.3 for instance which is still having a share of 1.38% of all Firefox visits. This highlights one of the core problems of Mozilla: Getting users to update the browser to more recent versions. It needs to be noted that Firefox 5 has been released at the end of June. It is expected that the browser's market share will rise considerably in July.

Google Chrome is the clear winner when you look at market share gain in the past two years. Most Ghacks visitors run various versions of Chrome 12 and 11. Older versions are still being used, Chrome 10 for instance has a market share of nearly 2%.

Opera Mini had more connections in June 2011 than the desktop version of Opera. That's an increase of nearly 2% over the past two years.

Google Chrome, at least here on Ghacks, managed to snag away market share from the Firefox web browser, and not Microsoft's Internet Explorer.

Mobile use is increasing a lot, and it may be time to get a special theme for mobile users to improve their experience on site.

And there is apparently at least one user who is connecting to Ghacks with Windows ME. 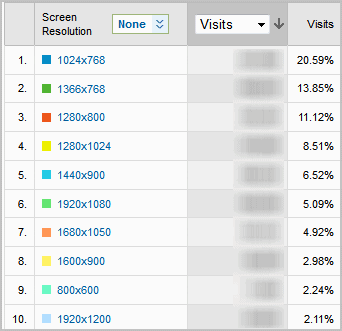 Almost 80% of all Ghacks visitors have Java enabled in their browser. That's an impressive value, considering that it is likely that the majority does not need Java at all on the web.

The top five countries according to Google Analytics are:

Most popular languages of the operating systems are:

The top search engine is Google which refers 60.68% of all search engine visitors followed by Bing with 4.95% and Yahoo with 2.39%.

Anything else that's missing that you would like to know, or something that you want to add? Let me know in the comments.

Martin Brinkmann is a journalist from Germany who founded Ghacks Technology News Back in 2005. He is passionate about all things tech and knows the Internet and computers like the back of his hand. You can follow Martin on Facebook or Twitter
View all posts by Martin Brinkmann →
Previous Post: « Software Developers: Host Your Files On Ghacks
Next Post: My Bank, Mastercard And My Annual Hosting Invoice »