Many computer users like to personalize the interface of their operating system with themes and custom desktop backgrounds. Changing the wallpaper of the computer is usually only possible if the image is stored locally. Microsoft has added a native option to use photo RSS feeds as sources for background images.

Another popular choice are wallpaper rotators that change images regularly. These images are either taken from a local pool of images or from an online source. 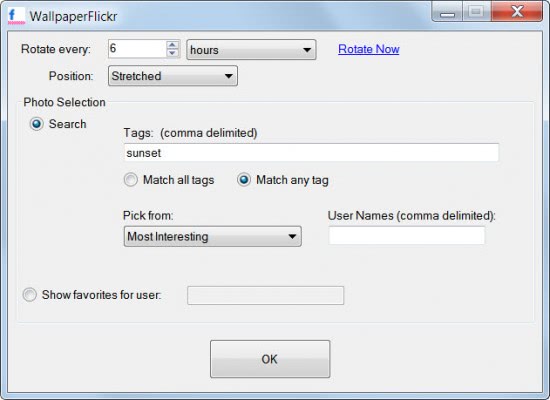 Wallpapers are either found through the use of tags or by specifying a Flickr user. The wallpaper rotator supports multiple tags and offers to sort them by factors such as relevance or data of publication. Photos can also be selected from a particular user only.

Wallpapers are rotated every six hours by default and stretched if their resolution is smaller than the desktop resolution.

The wallpaper rotation is flexible, allowing users to design the rotation interval from mere seconds to months. Wallpapers can also be tiled or centered.

Desktop wallpapers are rotated in the selected interval. Users can use the get new wallpaper option to manually get a new wallpaper that is then used as the background image until the next image is downloaded automatically by the application.

The developer should consider adding an option to exit the application after changing the wallpaper. The Windows Task Scheduler seems to be the best option for users who want to automate that process right now.

Flickr Wallpaper Rotator requires the Microsoft .NET Framework 2.0. It is compatible with 32-bit and 64-bit editions of the Windows operating system. The program needs elevated rights at least on Windows 7. A download is available at the Codeplex project page. (via)

Winamp 5.9 RC1 has been released