Good news iPhone lovers and users in general, we finally have apps in the App Store that do things we have always wanted to do with the iPhone. First up, we finally have Marvel Comics titles available on the App store (yay!).

Then we have this cool new app that translates your speech as you speek (thanks Doc) speak (how cool is that?!) and there is this another app that makes it easy to shoot Time Lapse videos with your iPhone. Plus, if you are a board game freak you are in for a treat as well.

In other news, did you know that the iPhone is closing in on Blackberry's market share? 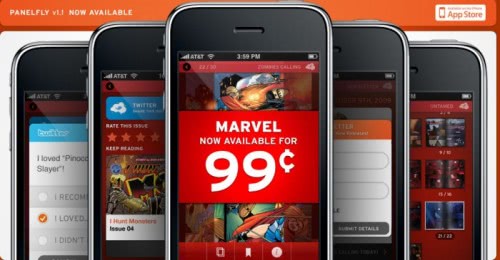 Comixology are the people who made the brilliant free comic reader on the iPhone. Now they have gone ahead and added 71 Marvel Comics titles to the in-app purchase catalogue. The titles include names such as The Astonishing X-Men, Captain America, X-Men Age Of Apocalypse and X-23. The comics are priced at $2 each. One bad news â€“ it is US only.

The title are also available on iVerse and Panelfly. iVerse users get the same deal and Panelfly users actually get them for $0.99 each [read]

Do you like time-lapse videos? You know, the ones where a very long event is shot in video and then compressed into a short footage? Like the growing of a sapling or the setting up of a stage? (that rhymes!) Now you can easily make videos like that with your iPhone, thanks to an app called the Timelapser. Clearly, the developers have spent all their efforts on making the app, not naming it (or making an good UI for it). And for one buck, you have no excuse for trying it out. [read]

Do you meet Spanish-speaking people frequently but canâ€™t speak the language to save your life? Worry not, the Jibbigo iPhone app has you covered. It is a nifty little app that converts your speech (English) to Spanish right as you speak. The converted text is then turned to speech and played over the microphone. It also works in reverse, saving you from uni-directional conversation. And the best part is that the entire thing is done offline, so you donâ€™t have to worry about it not working in places where you canâ€™t get a signal to go online. At $25, it is much cheaper than hiring your own translator to roam around with you wherever you go. Besides, some conversations should always stay private ;) . [read]

Sometimes, we all feel like blowing off a bit of steam, using heavy artillery and generally blowing things up with a heavy machine gun. Of course, we canâ€™t always do what we want. So what do we do when we feel like a tightly packed box of gun powder just waiting for a spark? We get a new iPhone App called Firepower and blow the head off the annoying co-worker end every other annoying thing. I mean virtually of course. You canâ€™t expect to get the real thing for $1, that too on your iPhone. You can also point it at you PC when the thing goes BSoD on you! [read]

This is about Settlers of Catan. Do I see you jumping up and down going yes yesÂ  yes yes yes? Well then, you would be happy to know that this popular board game is now available as an iPhone app. The the premise of the game is that you and (up to) three other players are on a tropical island and you have to beat the others by gathering 10 victory points. You get points for capturing settlements, building roads, etc.

You can play against other humans or against the AI. There is no multiplayer mode on this and so you have to physically pass the phone around in order to play the game with your friends. For $5, this is a nice game to help you spend those snowed-in days with your friends and family. [read]

Want to watch live NBA games on the go? Now you can do that for $40/year on your iPhone and other mobile devices. The NBA is offering full live games on mobile devices, up from only the highlights that it used to do. For the fee, you get to watch up to 40 live games per week (wow) and also access to up to two days of archived game. You can even pause and rewind up to 30 seconds during a live feed. Currently available on AT&T and T-mobile USA. Way to get more dedicated viewers NBA! [read]

Before I sign off, I have to show you people this. It is the next big update on the iPhone. It is so good, it is actually delicious. In fact, I am wishing I could get one custom-made for myself right now!

Also, how could I not post this video in this iPhone post! It pokes fun at the iDon't Verizon Motorola Droid ad campaign.