The GPS tracking device was put into a briefcase and sent away with the DHL transportation company which flew it around the world using travel instructions given to them by the artist. It took them 55 days to finish the route and deliver the tracking device to the artist who downloaded the date to his computer to create the drawing from it.

The drawing was created in one stroke that passed six continents and 62 countries and a total length of 110664 kilometers. 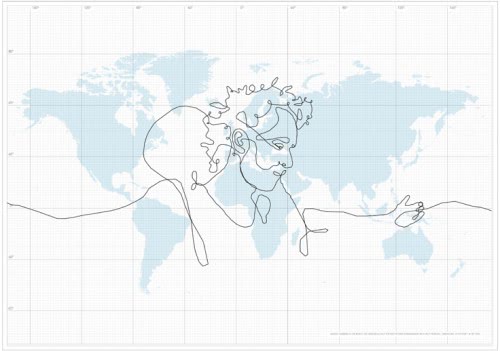 The artist created several Youtube videos and published proof of what he did accomplish by posting pictures of the GPS device and the delivery notes as well as two Youtube videos detailing several aspects of the project. What can I say, it's interesting if you like it or not. Maybe a new art form, GPS art was created. What do you think ?

Update: The web page is not longer available. It was later discovered that the whole thing was a hoax. The Telegraph for instance received confirmation from DHL that the artwork was an entirely fictional project but that the artist was indeed in one of their warehouses as part of an art project.

Some users remarked the flaws in the drawing as it did not make sense that planes would fly loopings around in locations with no landmass underneath. It is non-believable that a cargo plane would fly this way as there are no possible stops in some of the locations the artist drew on the map.

So, it is a hoax, a good one that good everyone buzzing with interest for a while. It is however disappointing that the art map was not a real project as it would have been kinda interesting and unique.

Article Name
GPS Drawing?
Description
Artist Erik Nordenankar had an interesting idea for a self portrait. He would send a GPS device around the world to specified coordinates to draw the largest image the world has ever seen.
Author
Martin Brinkmann
Publisher
Ghacks Technology News
Logo
Advertisement