I was rather skeptical of Adobe Air when it was first announced thinking of just another desktop application that no one would ever need or want. Surprisingly though this is changing quite dramatically with the release of some very cool and useful applications for that plattform. The latest gem is called Mooflair, a desktop video player supporting several online video portals like Youtube, Daily Motion and Metacafe.

The first thing that I noticed about Mooflair was its excellent design and responsiveness. I had some troubles finding the video search option, it's a bit hidden under the RSS menu. Mooflair does not offer a full video search yet which is rather unfortunate. It provides access to all video portal RSS feeds which means to several dozen videos in certain categories like Video Games, Music and HD.

Local videos can be played as well. The ability to download videos is a nice feature but more or less a default feature in every video player of that kind. Mooflair does offer enough videos so that it does not get boring to fast but it is kept back by the lack of a full site search. 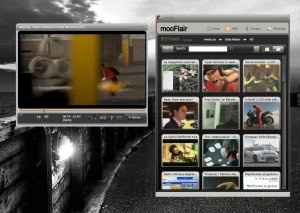 Another excellent feature is the ability to add videos to the playlist which can be filled with videos from all supported video portals. Those playlists can be saved and played at a later time. It is even possible to mix local and online videos into one playlist. Mooflair has everything it takes to become an excellent Adobe Air application, the only missing piece is the full video search on all portals.