SSMunch is a new fast mp3 search engine that searches various sources on the Internet and provides an interface that makes it possible to listen or download the music that was found during the search. It uses a simplistic design on the frontpage and Ajax at the results pages. The way the results are placed make it easy to download several mp3 at once which is a feature that many music search engines that allow downloads are missing.

SSMunch [via Go Web 2.0] seems to search the three websites eSnips, iJigg and MP3 Realm. That's at least the three that can be selected individually before performing a search, the only other option is ALL which apparently searches all three of them. A search for Madonna - yeah that's my default search term when I test mp3 search engines - revealed 69 result pages with 20 songs each. Not all songs that were listed were actually Madonna songs, covers were also included and one of the first was David Hasslehof with La Isla Bonita. I had to get this one !

Some other tests did bring up lesser results but still enough to make this an impressive music search engine. The website is very responsive and good to navigate, music downloads are rather slow though. The one thing that I do not like that much is the way the Listen link has been implemented. If you click on listen a new page opens with controls to start the playback of the song. 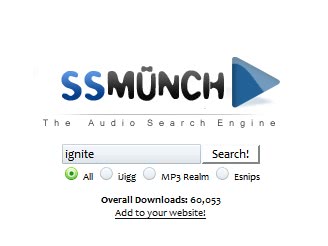 It would be far better if the controls would open on the same page instead. A playlist would be nice as well. Still if you want to download songs SSMunch provides you with a way to do that.

Update: The service is no longer available. I suggest you use YouTube instead to find and play music that you are interested in.