SMAC leaves the hardware MAC address alone but offers a software based way to change it which remains changed even after you reboot the computer.

SMAC protects the real MAC address on wireless networks and can be used by IT professionals to test Intrusion Detection Systems and analyze network problems. Changes become active immediately and can be tested with a link to the ipconfig tool. The Evaluation version has several limitations but can be freely downloaded.

You are free to change the MAC address of your system to whatever string you would like it to be. Note that while it is unlikely that the change will have an effect on your system's networking capabilities, you can still go back to the original MAC address easily whenever the need arises. 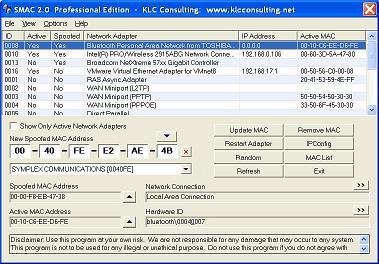 The program is not free and if you are looking for a program that you can use as an alternative, you may want to check out Win7 Mac Changer instead which offers to do so. The program is compatible with Vista and newer versions of Windows, despite its name which indicates the contrary.

It supports a variety of features. To use it simply select the network adapter that you want to modify first. The current MAC address is displayed by the program, and to change it, you simply select the operating system that you are using and a new MAC address. You can enter the new address manually, or click the randomize button to pick a random address instead.

You can also use the interface to reset the setting to the default at any time.