Windows has a feature that groups similar windows, for example seven Windows Explorer windows, under one taskbar button which is great if you like your taskbar as clean as possible, or have that many windows open at all times that you run into space issues as they do not fit on the taskbar together at the same time.

On Windows 7 and newer versions of the operating system, you define the grouping behavior of the taskbar in the following way. Right-click on the taskbar and select properties. Here you find the preference taskbar buttons listed under the Taskbar tab. 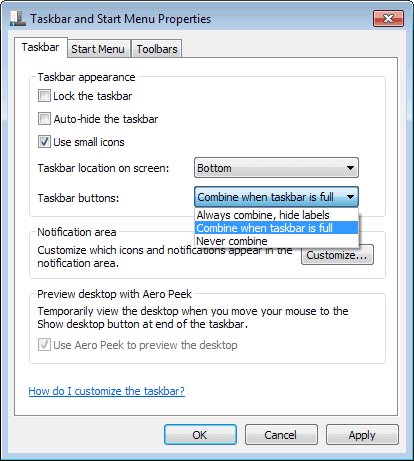 Changes that you make here are applied instantly, which means that you do not have to restart the PC or log off and on again for that.

There is however no direct way to change the number of windows that are needed before Windows starts grouping them.

To change the default behavior you need to edit a value in the Windows Registry and add a new key to it.

Create a new DWORD and name it TaskbarGroupSize.You do that with a right-click on the Advanced folder and the selection of New > Dword (32-bit) Value from the context menu that opens up. Name the new preference accordingly, and double-click it afterwards to set a value.

You can now assign the following values to the key:

Close everything and restart your computer, or sign out and on again.