Ok. I have seen lots of movie promotions but this one is topping them all. Remember the Simpsons TV series? The Kwik-E-Mart were Apu is pressing money out of Homer and his friends? Well, they apparently created several of those across the United States to promote the new Simpson movie.

You can buy all sorts of Simpson stuff that looks like it came right of the tv series. Cereals called KrustyO's, BuZZ Cola, Squishee Donuts and much more. You see Simpsons characters standing around and everything resembles the Kwik-E-Mart from the TV series. Here are some pictures:

Take a look at all images at Flickr. I'm a bit worried about regular customers though. A sign read for instance "5 Minute Parking. Violators will be executed" which could turn off some customers. Don't you think?

The stores that were converted for the promotion of The Simpsons movie were 11 7-Eleven convenience stores in the United States and Canada. 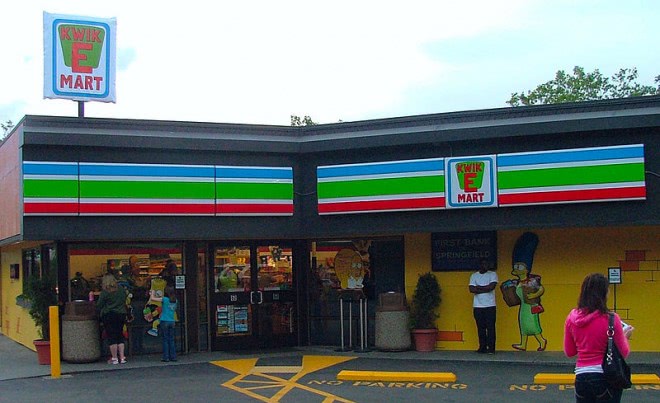 It is interesting to note that 7-Eleven paid the money for the promotion and that stores that were taking part in it saw a 30% jump in profits during the time the promotion ran. Other 7-Eleven stores sold products from The Simpsons as well, including Buzz Cola , Krusty-O's, Squishees or Sprinlicious doughnuts but not Duff-Beer. Several in-store items were re-packed in Simpsons-themed packaging

Two Kiwk-E-Marts were opened at Universal Studios Florida and Holywood in 2007. Visitors can purchase Simpsons merchandise and products in the stores up to this day. They are the two only surviving stores as all 7-Eleven stores were converted back to 7-Eleven stores after the promotion ended.

Martin Brinkmann is a journalist from Germany who founded Ghacks Technology News Back in 2005. He is passionate about all things tech and knows the Internet and computers like the back of his hand. You can follow Martin on Facebook or Twitter
View all posts by Martin Brinkmann →
Previous Post: « Preview Daily Top 25 of Youtube with SlapVid
Next Post: Song identification community »