The mobile phone market is an ever changing place and companies that were once on top may find themselves at the bottom of the food chain after short periods of time. It happened to Nokia which was steamrolled by Apple and Google, and also Blackberry. While both companies are still in the business, they have a hard time winning back lost market share.

Ubuntu, the company responsible for the popular Linux distribution of the same name, has just announced Ubuntu for Phones which will be unveiled for the first time on this year's CES in Las Vegas from January 7-11, 2013.

Update: You can check out the list of supported devices and community devices on the official Ubuntu Touch website. End

The phone comes in two main flavors, first as an entry level Ubuntu smartphone and then as a Ubuntu superphone which not only includes everything the entry level provides but also with desktop convergence capabilities. What this means? You can connect the phone to a computer monitor to use it as a thin client.

Check out the system requirements below:

Not many phones of today are supported by the superphone when you take the requirements into account. While 1 Gigabyte of memory should not be that of an issue, the 32 Gigabyte minimum Flash storage space certainly is. 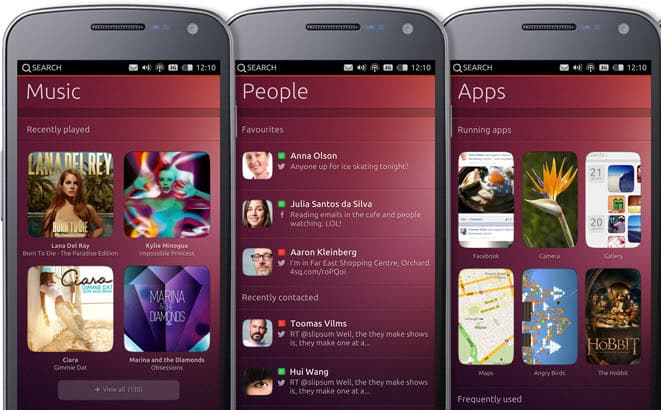 Information provided are rare at the moment. The phone seems to support all the latest technologies including HTML5 and apps can be created not only for the phone but also for the desktop at the same time.

The phone supports a couple of new design choices and options that sets it apart from other smartphones. A short swipe from the left for instance displays a small bar of favorite apps and the developers promise that you will switch faster between apps than on any other phone. A swipe from the right takes you back to the last application you have used, and swiping from the bottom reveals app controls.

The option to use the phone as a thin client is very interesting and should have lots of appeal with tech savvy users, especially those who already work with Ubuntu systems. Will it be enough to snag away market share from Google or Apple? Or will it compete with Mozilla's Firefox OS instead?

A truly open phone, one that you can hack and modify the way you want to without having to root it first, would surely be something of interest. It is not clear how and if contents and features are locked in the Ubuntu phone, guess we will find out more about that during this year's CES.

According to The Verge, first phones powered by Ubuntu for phones will come out in early 2014 or the last quarter of 2013. Ars Technica reports that Ubuntu 14.04 will be the first image that works across all devices, be it desktop PCs, tablets or smartphones.

Now You: Would you run an Ubuntu phone?

Martin Brinkmann is a journalist from Germany who founded Ghacks Technology News Back in 2005. He is passionate about all things tech and knows the Internet and computers like the back of his hand. You can follow Martin on Facebook or Twitter
View all posts by Martin Brinkmann →
Previous Post: « GPS could soon to be more power efficient thanks to Microsoft
Next Post: Create a Windows Power Efficiency Diagnostics Report »