Skype is one of the messaging programs that I'm running on my system, mainly to chat with a few business contacts and friends who prefer the software over other applications. I'm not a huge Skype user but do not mind using it when I have to.Up until now, I only used it on a Windows desktop PC and no other systems, even though Skype is available for all major desktop and mobile operating systems.

It appears that some devices running the operating system will ship with Skype pre-installed, while it may need to be installed from the Windows Store on others. The new Skype for Windows 8 comes as a fullscreen app that is displaying recent conversation and favorite contacts on start up. The app enables you to add favorite contacts here so that you can start communicating with them directly from here. 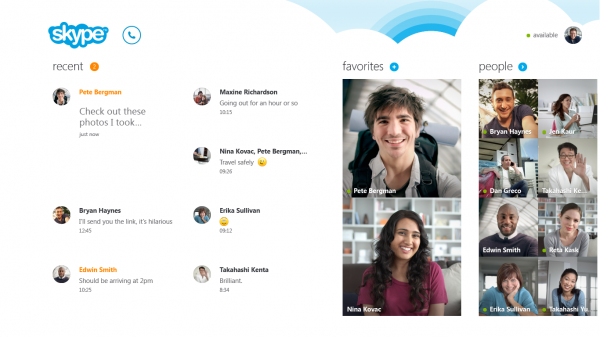 The new dial page displays your Skype credit, the recent calls you have made, your subscriptions, and a pad to dial landlines or mobile phones from there. 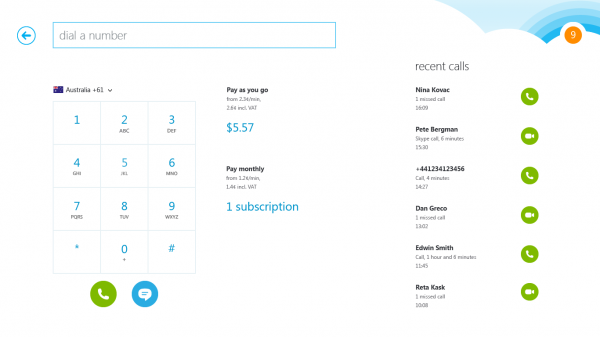 What's probably more interesting than that is the "always on" nature of the application. If it is running, you are available to receive calls and chat messages, even if the application is not on the front. Notifications are displayed at the top right of the screen when someone messages you or tries to initiate a call.

If you are logging in to Skype with a Microsoft Account, you will also benefit from the integration of Skype into Windows 8's people app. It is an address book or contact list of sorts but with advanced features like social media activity reports for sites like Facebook or Twitter. You can also call the contacts right from the people's app interface if a phone number is associated with their account.

Here is a promotional video for the new Skype for Windows 8.

If you plan on using Windows 8 and Skype, which version will you install? The desktop application or the Skype app? I think it will be interesting to see how the two applications differ. Do they offer the same functionality, or is one lacking features that the other offers?

Get iMessage on Your Windows PC: Step-by-Step Guide for Windows 11/10