Sometimes you may want to move files hosted somewhere on the Internet to another server or provider. While you could download the files to your local computer - if you do not have a local backup available - to upload them again to the new server or provider, you sometimes however may prefer to transfer files directly between servers.

A core benefit of this procedure is speed. Your home computer's upload and download speed is usually fairly limited in comparison to the speed of Internet servers, so that it should take less time to move the files. You may however run into issues as well, with trust being one of the most important ones. If you want server to server communication, you need to trust those servers with data so that they communicate with each other.

And it is the same when you look at the Backup Box service. The service's core feature are direct server to server transfers between cloud storage providers such as Box, Google Drive, SkyDrive, SugarSync or Dropbox, as well as custom servers that can be accessed via ftp or sftp. You configure Backup Box to transfer files from one server or provider to another. Why would you want to do that?

You do need to authorize at least two services or servers before you can start using the service. As far as cloud hosting services go, you do not have to enter your username and password on the Backup Box site. You instead authorize the site on the cloud providers website so that it can access your data, and you can naturally revoke that authorization at any time as well. Only ftp, sftp and MySQL servers need to be authorized directly by adding an authorized user account to Backup Box.

Once you have added at least two services you can configure transfers between them. You have got the option to transfer all files, or only select files or folders to the new server or service. 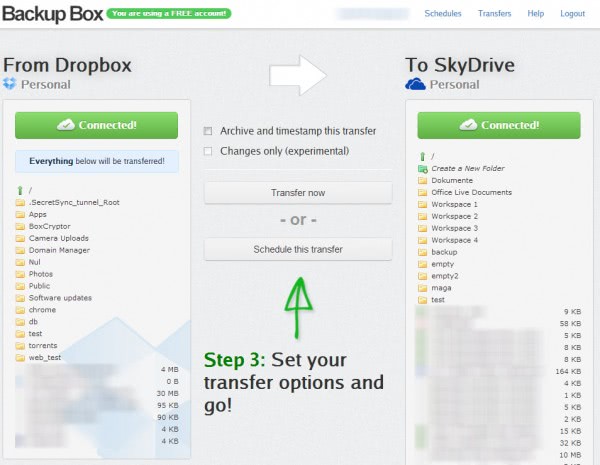 And instead of transferring files directly, you can alternatively schedule transfers so that they are run regularly by the application. You could for instance backup your website on a weekly basis, or transfer the files from your Dropbox account to SkyDrive once a month.

Another interesting option is the archive and timestamp feature which zips the selected files during the transfer. That's useful if you need to make room on a server or an account.

Free account usersÂ  are limited to transferring 1 Gigabyte of data per transfer using a maximum of 10 transfers in that time. Pro, premium and enterprise accounts are available that raise limits and make available additional features such as incremental transfers.

It usually takes minutes before the first files start to appear on the selected server or cloud hosting account you are transferring the files to.

As far as security goes, Backup Box states that it is using 256-bit SSL encryption whenever supported to transfer files, that it wont retain files on their servers, and that Amazon S3 is used with a AES 256-bit encryption for temporary storage.

One Gigabyte per month won't take you far, especially if you are thinking about scheduling regular backups of your websites or data that you host online.