Hideman is a free VPN service with mutliple server locations

A virtual private network (vpn) can be helpful in a number of ways. First, you can use it to hide your computer's IP address when you are connecting to servers on the Internet. This basically means that server logs and people you come in contact with see the IP address of the VPN server you are connected to, and not your own IP.

The second reason is security. Connections to VPNs are encrypted which means that your data is safe from snooping users in the same network. This means you do not have to fear that someone in a hotel, Internet cafe or airport can steal personal information and data from you.

Hideman is a VPN provider that is offering a basic free service, and paid commercial services. All plans share a handful of traits, including support for OpenVPN and PPtP and data encryption. The free version is limited to 2 Gigabytes per month of traffic and may also be subject to a speed limit of 512  Kb/s in peak hours. Lastly, you also do not get port forwarding or changing the IP on the fly with the free version.

While not mentioned on the plans and pricing page, it appears that the free account is also limited to five hours of use every week. You do not need an account to use the program though which is definitely a positive feature of it.

The program installs a new system driver during installation, and will display its main program interface after installation to you. 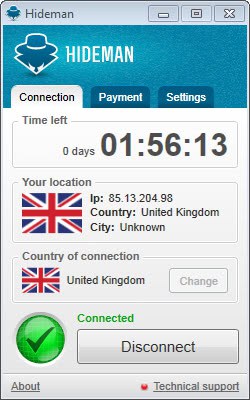 It displays your current location, IP and city in the interface, and a count down if you are using the free version of the program. A server located in one of the supported countries is preselected here, and you can switch to other available servers with a click on the change button.

It appears that all servers are available in the free version of the program as well, which is another aspect that the plans and pricing page does not reflect correctly. Available countries include Germany, the UK, Netherlands, France, Russia, Canada and the United States.

You can configure the program to automatically make a connection when you start it up, and extend your free limit by five hours under payment. Here you can also pay for a weekly or monthly membership starting at $3 per week or $9 per month.

If you need to connect to a VPN occasionally, less than five hours per week, then you may want to check out Hideman to see if you can work with it. If you need more than that then you'd better switch to free VPN services that do not impose such a time limit on you. The software client is darn  easy to use which is definitely a plus.

The website could use a make over. Especially the plans and pricing page which is listing information that are no longer valid, and the faq page which needs information on how to set up the VPN manually on a system.