Google to retire iGoogle on November 1, 2013

Bad news for users of some of Google's lesser popular and known services. The company has just announced another round of service cleanups on the official company blog. Probably the most prominent service that Google plans to retire is iGoogle, a service that is offering users a personalized startpage that they can fill with custom gadgets. Gadgets include news, communication related tools or finance information like stock charts.

I know a few users who use iGoogle as their start page on the Internet, and they will be extremely disappointed that Google made the decision to close the service down. According to the announcement, iGoogle will be retired on November 1, 2013 to give users enough time to "adjust or export data". The core reason for the move? The rise of mobile platforms like Chrome and Android that have "eroded" the need for iGoogle over time. 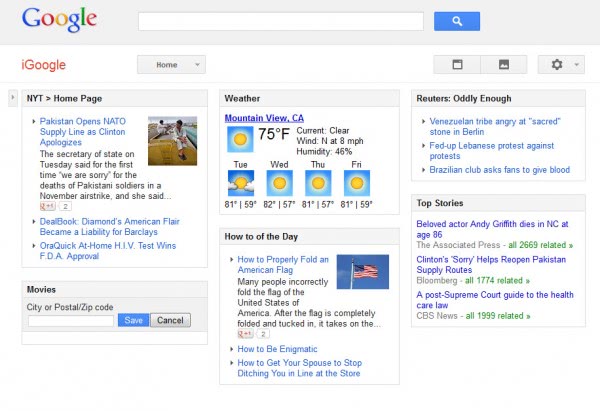 Alternatives for iGoogle are My Yahoo or Netvibes among others.

Google Video, a service created by Google to conquer the video world, will also be retired completely. Google Video uploads were stopped in May 2009, and Google Video users have until August 20 to migrate, delete or download their content. All content that remains on Google Video after that time will automatically be migrated to YouTube as private content that users can access in the video manager on YouTube.

The recent acquisition of Meebo has put Google into a position to retire Google Talk Chatback, a widget that webmasters could embed on their websites to interact with site visitors. Google recommends that webmasters who did make use of Chatback check out the Meebo Bar instead.

Google is also closing down Google Mini, which was part of the company's Enterprise Search offering. From July 31 on Google will discontinue the product and suggest to user other Google products like Google Search Appliance, Google Site Search or Google Commerce Search instead.

Lastly, Google will also be retiring the Symbian Search app in an effort to "focus on the company's mobile web search experience". Symbian phone users are encouraged to use google.com for their searches instead.

Are you affected by the new round of retirements?