In the race to beat the Macbook Air for size and portability, there have been precious few Windows laptops.Â  Indeed so far we've only seen Sony's Z Series and the Dell Adamo which is no longer on sale.Â  Now though Samsung have stepped bravely into the fold with the Series 9 (known in the USA as the 900X3A) and they were kind enough to send me a review unit which I've been playing with for the last week.

So, what is a Windows 7 ultraportable really like to use and is it a Macbook Air killer?Â  In the first part of this review I want to talk about the unboxing experience and the hardware itself.Â  Tomorrow in the final part of the review I'll discuss what the laptop is like in actual daily usage and give my overall verdict. 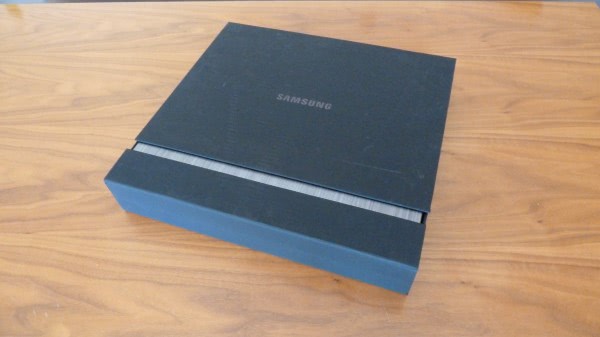 The laptop runs on the new Intel Sandybridge architecture with a 1.4GHz Core i5 processor with four visible cores, 4Gb of DDR3 RAM, a 128Gb SSD and a 13.3 inch screen with a resolution of 1366 x 768.Â  Internally there's gigabit ethernet, 802.11bgn wireless (though it's only single-band 2.4GHz wireless n, not the full triple-arial variety) and bluetooth 3.Â  It also helpfully sports a USB 3 port as well as a USB 2 socket, a Micro SD card slot and an HDMI port.Â  It retails for around $1,600 (UK Â£1,300) so isn't cheap and is slightly more expensive than the Air. 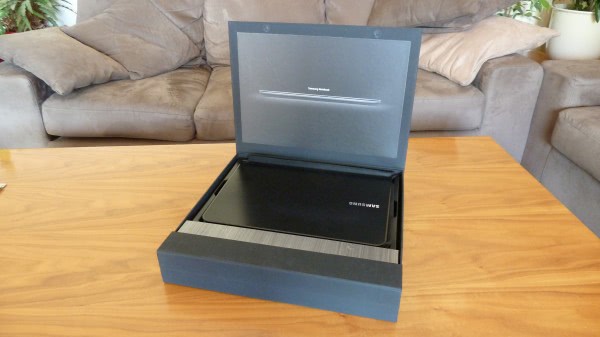 Clearly a lot of thought has gone into the unboxing experience.Â  The box itself is pretty big, though there's not a lot in it.Â  The inside of the lid teases you with how thin this laptop is, while the machine itself shines out at you in glossy black.Â  Underneath is a wallet with all the manuals, documentation and a restore disc helpfully bundled together while a flap at the front of the box hides the power supply and an adapter needed to use an Ethernet cable with the machine.Â

The laptop itself is slightly thicker than a Macbook Air, though only marginally, at 17mm at its thickest.Â  It's light as a feather though and, surprisingly even lighter than it's Apple equivalent at just 1.32Kg.Â  It's deceptive just how light this laptop is and it's quite disconcerting the first few times you pick it up.Â  You can easily hold it upright with just two fingers and carrying it in a case or bag is something you'd barely notice. 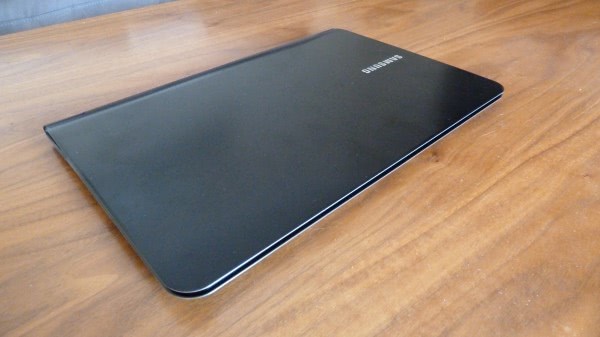 The exterior of the laptop is made from an alloy called duralumin, which is most commonly found used in the aeronautics industry.Â  It's this that helps keep the weight down.Â  The build isn't quite as rigid as the Air, but it's quite sturdy enough with only very slight flex in the chassis when pulled about.Â  It's all a brushed metal effect with a subtle Samsung logo embossed into the lid.Â  Open this up on a train and you'd certainly be drawing admiring glances from across the cabin.

That said, it's generally understated enough not to attract too much attention.Â  I took it to the pub last night and hardly anybody batted an eyelid.Â  This is good for security and having a machine that won't be the first thing a thief targets when you're out and about. 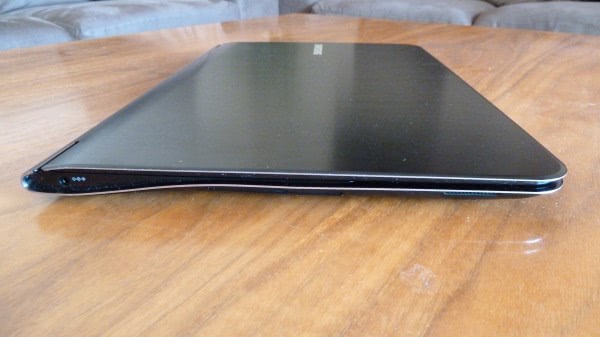 On the left side of the laptop sits only a power socket, on the right side just a kensington lock port.Â  All the main ports for this laptop are hidden behind two flip-down panels on the left and right underside.Â  It's a nice idea that keeps the lines clean and can help stop the ports becoming dirty.

The actual design itself is lovely, with the screen appearing to float above the body when its closed, in fact it can be said that closed this machine is even prettier than when you have it open.Â  There are strips of bare silver metal edging the screen and base that give it an air of luxury.Â  It can safely be said that on the looks front the Series 9 gets a solid 9.5 out of 10.Â 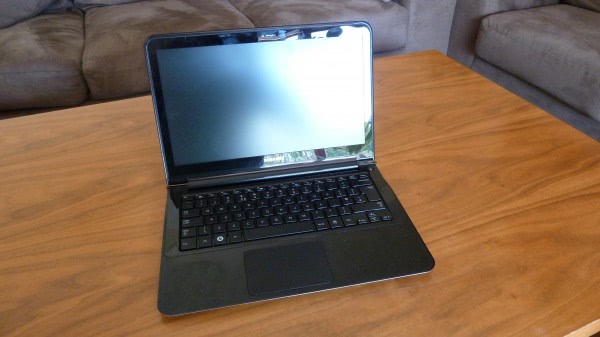 Inside it's more of the same with brushed metal complemented by a piano black high-gloss plastic surround for the keyboard and screen. This actually works very well and doesn't look plasticy, rather more luxurious. It's a scrabble-tile keyboard that's slightly more spaced out and accessible than the one on the Macbook Air. Like it's Apple counterpart the touchpad is buttonless and multi-touch, so that it acts as a single giant button or a multi-touch trackpad.

Everyone I showed the Series 9 to was absolutely amazed by how good it looks and how light it is. It has an internal battery like the Macbook Air but this helps keep the lines clean. If you tumble it in your hands the attention to detail is quite impressive, with every angle thought of carefully and some solid-looking rubber feet to help keep that brushed metal clean and safe for the life of the machine.Â

All in all it's a hugely impressive piece of engineering, especially for what they've squeezed into it, and tomorrow I'll write up what this machine is actually like to use.