Eric's Movie Database is a software program to organize and manage movie collections. The lightweight application offers all the features that movie collectors except from a management application.

The software program concentrates on the collection aspect unlike other movie databases who desperately try to offer a unique feature that distinguishes themselves from other programs in the category.

EMDb is closely tied to the Internet Movie Database (IMDb) which it uses to look up and retrieve information about movies. It takes only 15 seconds from entering a movie title to search on IDMb to add it to the local collection of movies.

Source specific means the medium the movie is available in, for example DVD, CD, VHS or a computer video format. 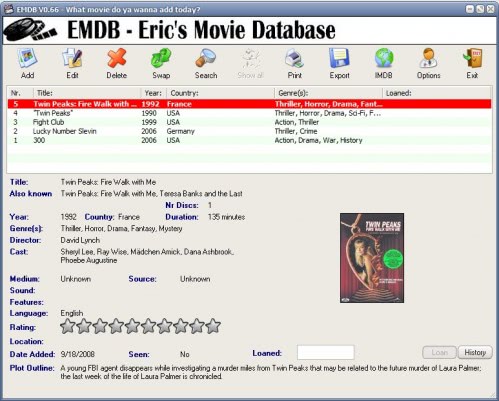 All movies that are added are listed in one central database which can be sorted in various ways. A search options is available to search movie collections using various parameters like genre, title or actors. One interesting feature of the search is that all information that have been added are available in menus which means that you can either enter the director manually or click on the name in the list instead.

The movie database comes with an export and print function and can also keep track of loaned movies easily. Eric's Movie Database is fast and responsive. It might appeal to users who want to quickly organize their movie collection without the added noise that other applications in the category produce.

Martin Brinkmann is a journalist from Germany who founded Ghacks Technology News Back in 2005. He is passionate about all things tech and knows the Internet and computers like the back of his hand. You can follow Martin on Facebook or Twitter
View all posts by Martin Brinkmann →
Previous Post: « PowerPoint Joiner
Next Post: Remote Batch Copy »