Use Multiple Screens over Network

Using multiple screens on one computer is nothing unusual these days. All you need is a graphics adapter that supports two screens and an operating system that supports it. Setup is really simple and many professionals that do web design or work with image editing software use it to increase their work flow.

I came upon ZoneOS ZoneScreen at the Donation Coder blog which always has some great tips about new freeware. ZoneScreen supports multiple screens over network which means that you do not need an adapter that supports dual monitors, all you need are two devices that are connected over a network, and of course two monitors.

As you can see on the picture a notebook and a desktop computer display part of the same application. It is possible to use this on PDAs as well which makes it a great tool for system administrators for example who can carry a PDA or laptop with them that displays information. 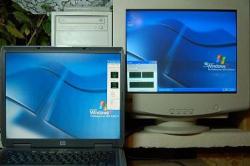 ZoneScreen consists of two parts: kernel-mode (running with privileges of Windows kernel) driver for virtual display (which is visible to Windows just as normal video card with monitor attached to it), and user-mode (running as usual user application like Notepad) wizard which is responsible for capturing image, transmitting it over the network, and drawing it at another computer.

Both parts of ZoneScreen (driver and wizard) are completely independent and can be used separately. This mean that in case we are interested only in mirroring desktop image, we do not need to install virtual display driver, and if we are extending desktop with ZoneScreen display driver we could use any other software, for example RealVNC, for transmitting desktop image over the network (in this case we need transfer only space of virtual display).

Update: The program is compatible with all recent versions of the Windows operating system.