Image Viewer IrfanView 4.50 is out

IrfanView 4.50 is the most recent version of the popular image viewer Irfanview that is available for Microsoft's Windows operating system.

IrfanView is a long-standing image viewer for all supported versions of Microsoft Windows, and for many versions that are no longer supported.

The viewer is free for personal use, and was uploaded by its developer to the Windows Store as well recently.

The new version of IrfanView is already listed at the developer website. Windows users can download it as a 32-bit or 64-bit version. 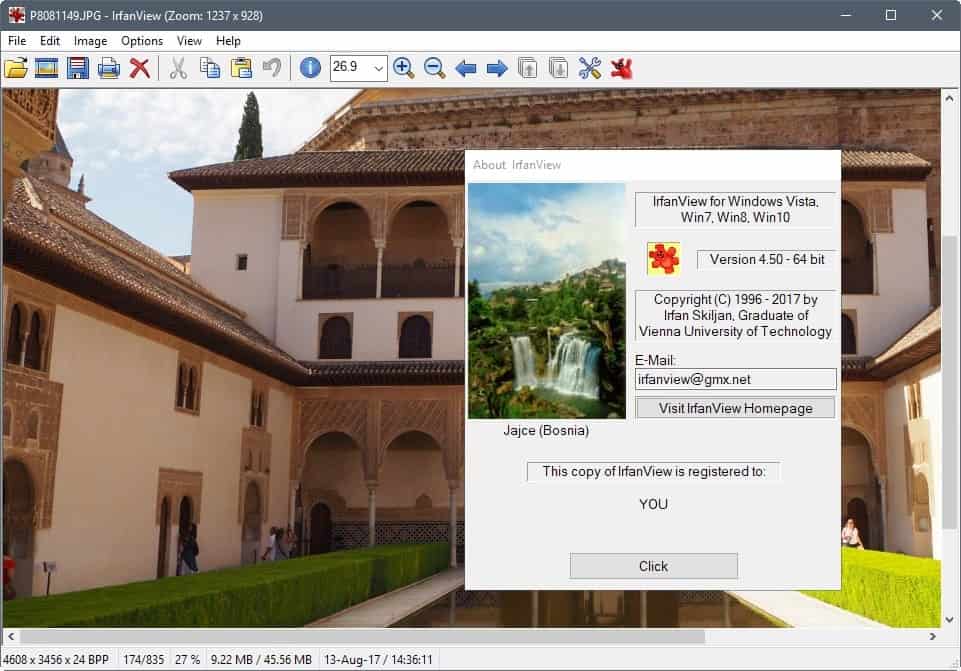 IrfanView 4.50 comes with a large list of changes and improvements. Probably the biggest of them all is that IrfanView (and many plugins) has been ported to Unicode. The image viewer's ini file will be converted to Unicode automatically when the properties dialog is called (Just hit P for that in the program interface).

IrfanView users who have installed plugins that have been ported to Unicode are asked to update them by downloading the latest -- unicode -- version from this page.

As far as new features are concerned, there are some. IrfanView 4.50 supports the iPhone PNG format in that version for instance.

The program's selection feature, which lets you draw a rectangle on the current image supports moving the selection now by holding down the Shift-key or Ctrl-key and using the right mouse button to move the selection vertically or horizontally.

IrfanView users who have disabled the view other files option under browsing, which loads the next or previous image in a folder when invoked, may use the mouse wheel to zoom the image instead in the latest version.

IrfanView 4.50 features a new "sort by Megapixels" thumbnail sort option, a new option to set the frame or page range in the extract pages/frames dialog, and a new startup parameter /hotfolder="folder" which starts Hotfolder with a specific folder.

Hotfolder watches a folder for new images, and loads them in IrfanView automatically when it detects new images in that folder.

Other changes include using PNG for wallpapers in Windows 8 and newer, some printing improvements, and the fixing of loading bugs for several file formats including SVG, DJVU or ANI.

Oh, support for Windows 9x has been dropped, but that should not be much of an issue as the operating system is installed on a low number of devices.

Now You: Which image viewer do you use and why?