Incorrect file timestamps can be a big problem on computer systems. Most file systems support a specific time range only, and files that have timestamps outside of that range may cause all kinds of issues.

The author of Timestamp Clamper wrote the Windows program to address issues when replication, e.g. copying, files from one directory to another between storage that uses different file systems.

He noticed this especially on files created by older camera hardware, as these would sometimes have invalid timestamp entries, for instance a timestamp that was all zeroes. This was interpreted by the operating system by setting the timestamp to the earliest supported date and time. 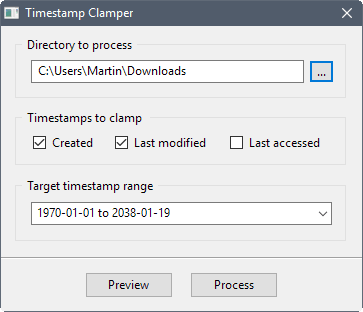 Timestamp Clamper is a portable program for Windows that you can run right after you have downloaded the application to your device.

The interface, highlighted on the screenshot above, accepts the following input:

The program comes with a preview option to scan a folder but don't make any modifications to it. Scans are very fast, and it is suggested that you use the preview feature to find out if files are stored under the path that you have selected that have incorrect timestamps. 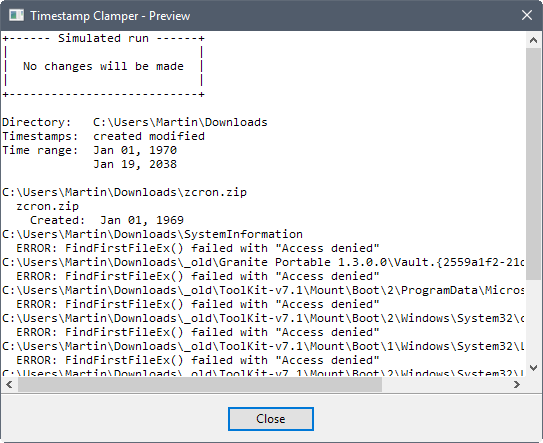 The log the program creates supports copying and pasting. It includes the list of errors -- if any -- information on files that are outside the date and time range, and whether the modification of date and time succeeded for these files.

Timestamp Clamper is a handy portable program for Windows. While specialized, it may be useful if you run into issues that are caused by out-of-range timestamps.