Can you remove the large c:\recoveryimage folder in Windows 10? - gHacks Tech News
ghacks.net

Can you remove the large c:\recoveryimage folder in Windows 10?

When I checked free storage of the main drive of a computer running Windows 10, I noticed that the folder c:\recoveryimage was taking up more than 27 Gigabytes of space on it.

That was a problem considering that the drive itself had a total size of 180 Gigabyte only.

Further investigation revealed that it was not updated since April 30, 2015, and that the majority of files in it where driver files.

A quick check of the folder showed numerous Nvidia driver folders, all at a size of about 330 Megabyte each.

The DONOTREPLACE.txt file indicates an earlier build ID, namely 10074 of the operating system.

It did not look like an essential folder on first glance because of the date of creation but it was unclear if Windows 10 used the folder for recovery operations or if it was a leftover and not needed anymore. 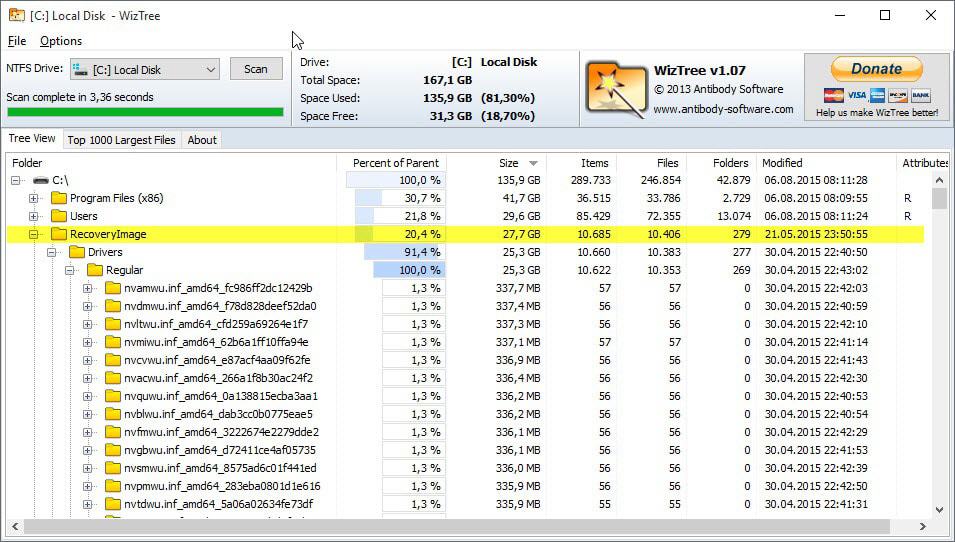 I first tried Disk Cleanup to see if it would get rid of the folder. You can start it with a tap on the Windows-key, typing disk cleanup and hitting enter. Hit the "clean up system files" button and wait for the scanning to complete a second time.

You will find old windows installation files there if they exist, for instance after an upgrade, but RecoveryImage was not listed there anywhere.

I knew that the folder and its files would not be used for Windows 10's Reset and Refresh functionality, as Microsoft mentioned during development that these would use runtime system files instead for their operation.

I made the decision to delete the folder and see what happens. Note that this is not recommended for productive environments.

I did create a backup of the partition first to ensure that I had a way back if things would go wrong before I deleted the folder.

Deleting it worked right away and while I got some prompts about system files, the folder was gone in the end and my drive has more than 27 Gigabytes of extra free space.

Should you remove the folder? I cannot answer that for you honestly. I did not notice any issues (so far) after the removal. If you do, I'd recommend that you create a backup first of the system or the folder before you remove it.

Now You: Do you have a RecoveryImage folder on your system? If so, how big is it?

Article Name
Can you remove the large c:\recoveryimage folder in Windows 10?
Description
Do you have a large RecoveryImage folder on your Windows 10 root drive? Find out if you can delete it to free up disk space.
Author
Martin Brinkmann
Publisher
Ghacks Technology News
Logo

Previous Post: « Want DVD Playback on Windows 10? That will be $14.99, thanks!
Next Post: Windows 10 Home users get automatic app update as well »