Microsoft's Windows 10 operating system ships without DVD playback capabilities. When you insert a video DVD into the drive of a computer running Windows 10 you will realize quickly that the DVD won't play on the computer.

Instead, you get an option to search the store for suitable applications or use another program installed on the PC itself (when you right-click and select autoplay for instance).

Microsoft promised to provide a DVD playback solution for Windows 10 to users of the operating system but did not quite mention when it would arrive and how it would look like. The only thing that was clear was that DVD playback support would come in form of an application that the company wanted to make available in the official Windows Store.

The Windows DVD Player application by Microsoft Corporation is now available for $14.99 in the store.

Not all users have to pay money to get the application as Microsoft makes it available for free for users who upgraded from Windows 7 or Windows 8.1 with a supported version of Media Center included. 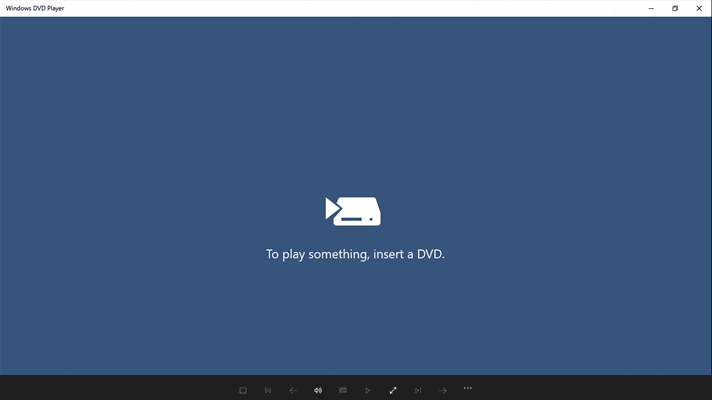 If you are not eligible, you may pay the $14.99 to add official DVD playback to Windows, or, and that is probably something that most users will prefer, use a third-party alternative instead for that.

The app, apart from being on the pricey side of things lacks functionality that Windows Media Center and most third-party solutions offer such as VOB playback. All it does actually is play video DVDs or ISO images and that's about it.

So what about other options?

If you want to go down the free route, you can grab any of the following programs for DVD playback and a lot more: VLC Media Player, SMPlayer or KODI

The main advantage all of these programs offer is consistency (and a better price point). If you get Microsoft's DVD application, you can use it only to play DVDs. If you want to watch a video file instead, you need to use Windows Media Player or another app for that.

With those applications listed above, you get everything in a single package including DVD playback but also support for the majority of video files, audio files and more.

Should you get the Windows DVD Player if you want to watch DVDs on your Windows 10 computer? No, because there are better free alternatives available.

Martin Brinkmann is a journalist from Germany who founded Ghacks Technology News Back in 2005. He is passionate about all things tech and knows the Internet and computers like the back of his hand. You can follow Martin on Facebook or Twitter
View all posts by Martin Brinkmann →
Previous Post: « DoNotSpy10 - Configure Windows 10 Privacy settings
Next Post: Can you remove the large c:\recoveryimage folder in Windows 10? »