WinPrivacy is a new program by the maker of the popular WinPatrol application that has been released as a beta version today.

The program, just like WinPatrol, is not free but commercial. It has been designed to improve user privacy on the Internet in numerous ways.

While you could assume that it is a CCleaner type of application, it is in fact complementary to the program as it concentrates on other privacy related issues.

WinPrivacy runs in the background as a service while you are using the computer. It monitors the system and informs you about the following in its dashboard:

Those are the three core features currently. It goes beyond notifications though which you will notice once you click your way through the interface. 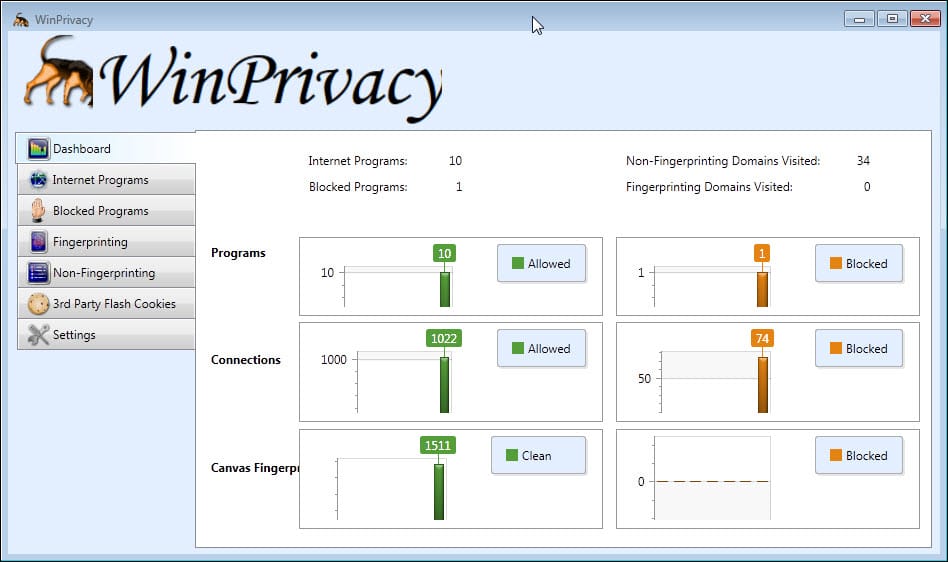 The program displays core information in a dashboard on start which highlight allowed and blocked connections and programs, as well as how many sites you encountered that used Canvas Fingerprinting. 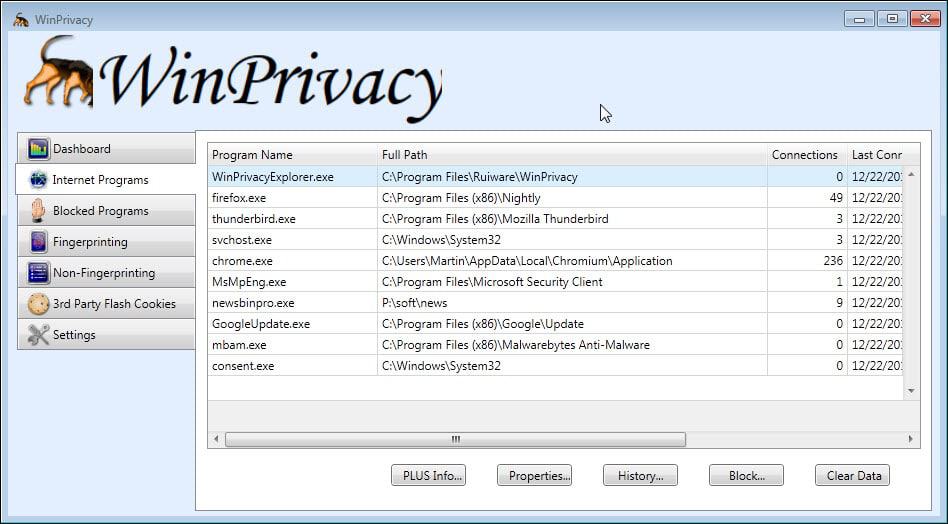 The software lists all programs that have created connections to the Internet while it was running in the background.

A history is provided which you can access to see detailed information about each connection that include the remote IP and port, bytes in and out, and time and date.

You can block any application from accessing the Internet with two clicks. This blocks all Internet traffic of the selected program.

All blocked programs are listed by WinPrivacy so that you can unblock them at any given time.

There is also an option in the program settings to block new programs that try to connect to the Internet automatically from doing so.

A notification is displayed when programs get blocked so that you know that this happened. You can then visit the blocked programs listing in WinPrivacy to unblock them if the need arises.

WinPrivacy detects Canvas Fingerprinting attempts and notifies you about them. This works similar to how Internet connections of programs are noticed.

The software lists all clean domains and those that use Canvas Fingerprinting in its interface with options to block fingerprinting attempts automatically in the settings.

It is furthermore possible to block all communication with domains that use fingerprinting.

This feature did not work correctly during tests. I ran the HTML5 Canvas Fingerprinting test on BrowserLeaks and WinPrivacy did not notify me about it or block the test from being run.

The third major feature of the application. It is currently not integrated in the beta. It enables you to clear Flash cookies on the system using WinPrivacy.

It appears that there won't be options to block the creation of these cookies in first place though.

WinPrivacy is in no way as comprehensive as WinPatrol but that is understandable considering that the latter has been in development for a long time.

The feature to block Internet connections from new programs automatically is helpful, as is the blocking of Canvas Fingerprinting or options to delete Flash Cookies.

I can see this program grow over time to become a privacy powerhouse but for now it is lacking features that I would like to see in it including options to manage cookies, support for blocklists and options to look up additional information about visited domains.