While it may be relatively easy to make sure that no resident programs are running on your computer system, it is not that easy if you are using public computer systems or other systems that you do not have full control over regularly.

The best protection against keyloggers is to be careful about what you do when you are using a computer system. If you do not enter any confidential data using the keyboard, say your credit card number or login information, then there is nothing of importance to record.

Password managers for instance offer good protection against many forms of keyloggers, as they can log you in automatically without you typing a character into the login box.

But if you want better protection, you need to deploy specialized anti-keylogger software.

Oxynger Keyshield is a virtual keyboard application with strong anti-keylogging capabilities. It is unfortunately only available for Windows 7 and later. In addition to that, it requires the Microsoft .Net Framework 3.5 which should be preinstalled on all operating system that it supports, and desktop composition on Windows 7.

The first thing that you may notice when you start the program for the first time is that it uses a random keyboard layout. While this means that it will take you longer to click on characters to send them to the application you want to enter them in, it is an essential protection against screenshot and video capturing keyloggers.

One could argue that a screenshot would still reveal what the user clicks on based on the position of the mouse cursor on the keyboard, but that is not the case, as KeyShield uses protection against these types of recordings. 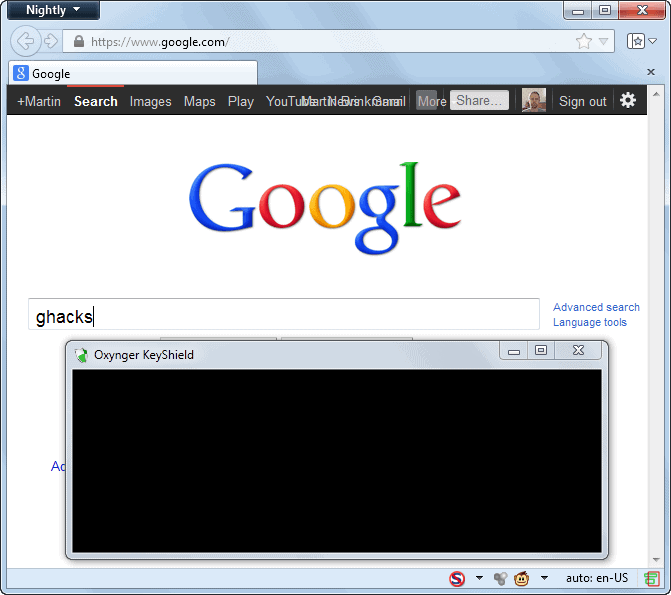 You can test the basic functionality by yourself by trying to take a screenshot of the interface. You will notice that its interface is completely black on the screenshot, so that it is not possible to determine which keys have been clicked on.

That's the reason why you do not see anything on the screenshot of the application.

The random layout makes it quite difficult to type longer strings, as you won't find the keys on their default position. While that is quite ok for entering a username and password, or critical information such as your credit card number or bank account information, it has not been designed to enter larger strings comfortably.

As far as compatibility goes, it seems to work with the majority of input fields that you come across on your computer or the Internet. The developer website offers a list of compatible applications, but that is just a selection and not the full list of supported programs.

That's not the only protection though that its developers have built into the application.  According to the developer's website, it protects 100% against the following types of keyloggers:

The program preferences provide you with a couple of interesting options. 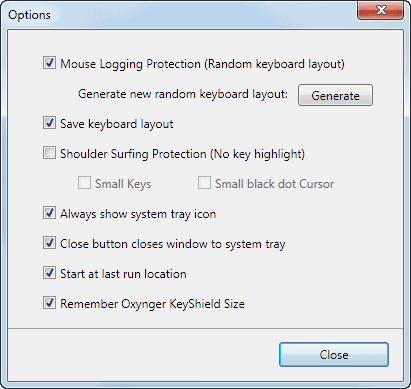 Here you can enable the shoulder surfing protection, which disables the highlighting of keys on the virtual keyboard when you click on them.

Another option that you have is to disable the random keyboard layout, so that you can work with the default Qwerty layout instead. while I would not suggest to do so, as it may make you vulnerable against keyloggers that log the mouse position and events, it may make entering larger amounts of text more comfortable.

The program uses quite a chunk of memory while it is running: 31 Megabyte on my Windows 7 Pro 64-bit test system while running in the background.

Oxynger KeyShield ships with a boatload of anti-keylogger features. While I cannot say anything about the real-world effectiveness of these protective measures, it appears to be a sophisticated program that has more to offer than most virtual keyboard / anti-keylogger solutions.

The screenshot / capture protection works well, as I was not able to take a screenshot of the program interface, no matter what I tried. The only thing that would work 100% is to take a camera and capture the monitor of the computer this way.

I'd probably wait until the program has been vetted by experts before you deploy it on your computer system or take it with you on trips.

Martin Brinkmann is a journalist from Germany who founded Ghacks Technology News Back in 2005. He is passionate about all things tech and knows the Internet and computers like the back of his hand. You can follow Martin on Facebook or Twitter
View all posts by Martin Brinkmann →
Previous Post: « Malwarebytes Anti-Exploit update improves exploit protection
Next Post: How to prevent Cryptolocker Ransomware to hit your PC »