Back in June I mentioned that Windows Store had its fair share of what I called then media player spam. This referred to dozens of media player apps that were designed to confuse and for the most part rip off users of the store. Some used official names, other icons and colors of popular tools, and all cost money to buy.

While that is bad enough, it outlined a much bigger problem: deceptive apps that hop on the bandwagon of popular products to deceive shoppers. There are several kinds of these apps available in Windows Store which I'd like to group into a few categories to highlight the issue.

I'd like to mention that Windows Store is not the only app store with this kind of problem. These apps have however been in store for quite some time now and nothing has been done about it yet. Okay, this may not be the most descriptive category description ever but read on to find out about it. There are dozens of apps in store that use official names and logos, are only available for money, and deceive the user in believing they are something that they are not.

WhatsApp Messenger Plus for example is available for $9.99 in store. The description explains what WhatsApp is in a large paragraph, and then tucked in between that it is only a tutorial for the messenger. There is also Whatsapp Messager here and WhatsApp Messenger for Windows 8: How to use.

These applications are available for a number of popular programs including Mozilla Firefox, iTunes,Google Drive, Winrar, BitDefender or Spotify.

Yes, some do not use the full product name only and add a how to use or something similar to it, but they do seem to use official icons and images of the programs and services.

Companies that do that are BA Media, with 49 apps of this kind in store right now, and Angry Birds Pro with 14 applications. 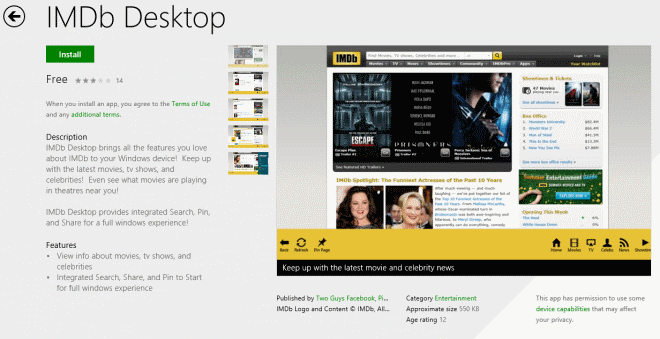 It is relatively easy to display a website as an application in Windows 8. Some companies do so to create touch or desktop versions of websites for Windows 8. The apps are called Yahoo! Touch or IMDb Desktop, and display the website or service in question in the application. I cannot really say if they improve anything, or if they are 100% copies. Regardless of that, they do use official logos and names used by those websites and services, and while free, add advertisement to those sites. 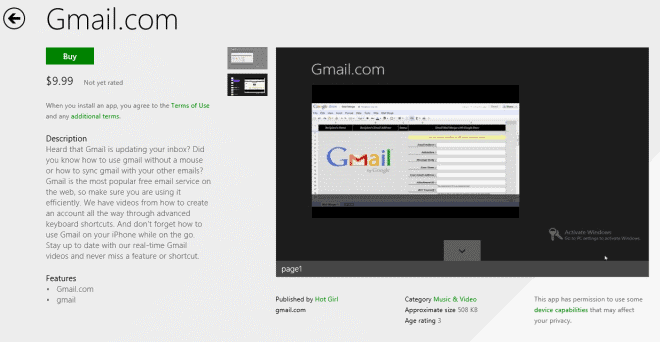 Some application developers go a step further than that. They use the official name of an app and make no effort to distinguish their product from the real thing.

I have already mentioned several of those products in the media player spam article: Windows Media Player 10 is for instance available for $4.99 each. It is however not produced by Microsoft, but by Stand Alone Apps. Facebook Mobile, available for $2.49 has received 1292 ratings at the time of writing even though it is not an official application but created by AnKo Software. Gmail.com on the other hand is available for $9.99, listed in the Music & Video category, and produced by a company called Hot Girl (which actually is a tutorial again it appears).

It is interesting to note that users have been scammed by applications before. Here are some quotes taken directly from the store:

Misleading this is NOT the app. Read the whole description. It is cleverly laid out to fool those who are not careful. Is is a very poorly produced tutorial too. Crap.

Completely Misleading. I just paid $8 for video tutorials... wtf. Not the app at all.

Do NOT BUY. Don't be duped by this app like I was. It is not the actual browser. It is only a stupid tutorial on how to use Firefox... and who needs that? Complete bs. I think it is intentional.

Disappointing. Not only does this app just wrap the mobile website and add a couple buttons, it also adds advertisement to your experience for just $2.49.

There appears to be an "anything goes" mentality right now in store which is fueled by an ineffective vetting process. Microsoft needs to take care of those apps in store to improve the user experience and avoid that users are scammed by applications that appear to be something which they are not.

This is not only bad for Windows users, but also for Microsoft and the companies whose products are referenced by those applications.

Martin Brinkmann is a journalist from Germany who founded Ghacks Technology News Back in 2005. He is passionate about all things tech and knows the Internet and computers like the back of his hand. You can follow Martin on Facebook or Twitter
View all posts by Martin Brinkmann →
Previous Post: « Windows compressing your high quality desktop backgrounds? Try these fixes
Next Post: One feature that I really like in Windows 8.1 »