That text document is then loaded in the HTML application. Once you have loaded the text file into the program interface, you see the count of the total number of slides that will be available in the final document. A click on the link here in step 2 of the process will merge the PowerPoint documents and display a blank PowerPoint window afterwards. 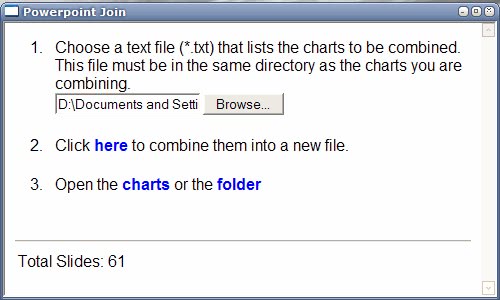 That window can be closed. Step 3 will display links to the combined file directly and to the folder were it has been created. The name of the file is combined.ppt. It contains all slides of all PowerPoint presentations that have been merged in the order selected by the user. (All slides of file 1, then file 2 and so on.)

You can change the order of presentations in the merged document with the use of the text document that is listing of all of the PowerPoint presentations that you want to merge.