The Vista Live Shell Pack for Windows XP is a collection of three shell packs for Windows XP that turn the visuals of Windows XP into a Windows Vista looking interface. The three packs distinguish themselves only by color from each other. They are available in baby blue, gray and pink (gosh) (via Techyard).

Changes to Windows XP require the patching of the file uxtheme.dll. This file refuses changes otherwise and does not allow the installation of any themes that have not been officially released by Microsoft. Vista Live Shell Pack comes with an installer that includes the uxtheme.dll patcher making it very easy to install the new themes. 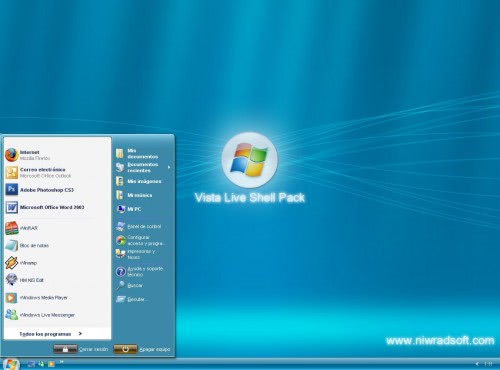 The installer provides a list of files that will be installed on the system. It turns out that the pack installs and modifies lots of files on the system, especially those with icons and other graphic information in them.

Many other files get updated as well if the user chooses so. Some noteworthy ones are the boot logo, logon screen, screensaver, the installation of Windows Vista fonts, the skin and some applications (ViOrb, TaskSwitchXP and RebIC). Everything can be unchecked in the installer. The installer can create a system restore point which is important to do in case something goes wrong during installation.

Update: The website the program was hosted on is no longer available. You can still download the latest version of the program from third party download sites like Softpedia. Since it is no longer updated, it is important that you create a backup first before you start running the program on your system.