If you are looking for a rather unique screensaver for Windows 2000, XP or Windows Vista you may want to take a look at Flitter which is a mashup of Flickr and Twitter at the moment.The program retrieves data from Flickr and Twitter automatically when it is running on the system and display its findings on the screen.

You obviously need a computer that is connected to the Internet to use this screensaver but it is very well worth it. The default setting for the screensaver pulls data from the public timelines of both Flickr and Twitter but you have the possibility to customize this further. 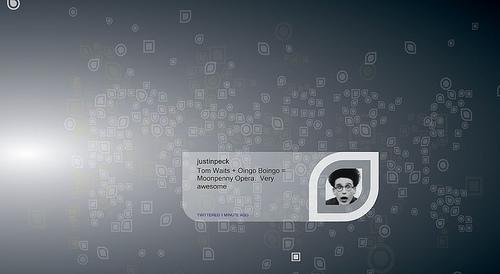 It is possible to watch a certain Twitter user only or watch yourself and your friends and family. You may choose to either view the works of a specific user or use tags for Flickr images.

The .net framwork 3.0 has to be installed on XP systems. To install the screensaver simply download the archive from the developers homepage and right-click the .scr file.

Update: Flitter has not been updated since 2007, which may indicate that it won't be compatible anymore with the recent Twitter and Flickr APIs. It is likely that the program won't work anymore after all those years. An alternative that you may find useful is Flickr .Net Screensaver, a program for Windows that can display images from Flickr when the screensaver is running.

It comes with a lot of options, for instance to display photos per user, group, or by everyone. There are a lot of options available to configure the screensaver to your liking. You can for instance display Flickr images as they come or in a special postcard format if you prefer that instead.

Update 2: The program itself has also not been updated since 2009. The commercial application gPhotoShow Pro offers full Flickr integration. You may want to give it a try as there do not seem to be any free alternatives available anymore for Windows systems.