DeleteOnClick is a freeware secure file deletion tool for Windows

Tax documents, bank statements, ID papers, photos and videos, these aren't the sort of thing you'd leave around your home, would you? Users who value privacy will know the risks of leaving important digital files and folders accessible to others.

Encryption of the data is a good option to protect it, e.g. by encrypting the entire system, a single hard drive or partition, or using an encrypted container for the safekeeping of important files. An encryption program like VeraCrypt can be used for that. 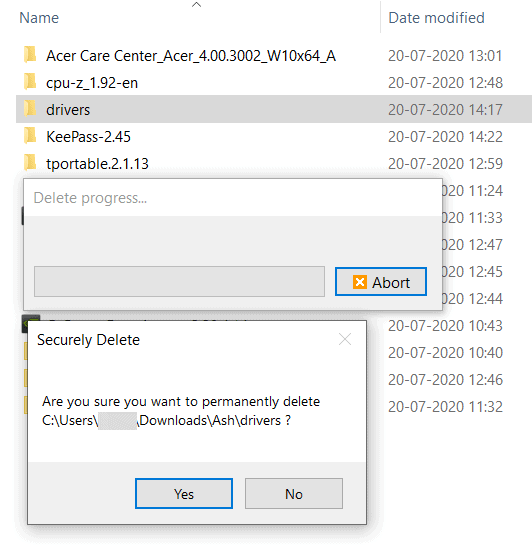 Windows' shift + delete maybe a nightmare when used accidentally, but at times when you use it to get rid of your data, it isn't completely fool-proof.

There are plenty of file recovery software available, and these can be used to gain access to deleted files. Even Microsoft recently launched its own file recovery utility, though we found it to be rather poor in its initial state.

Imagine losing a USB Flash drive which once contained your banking information, or a memory card that had your pictures on it? You never know how your personal information may be misused. Identity theft is no joke, we read about security breaches quite often in the news.

You can take some simple measures that can help minimize the chances of such unpleasant experiences occurring, like say securely deleting files. It's like using a paper shredder, but for digital files, and without the ability to glue the shredded bits together again.

DeleteOnClick is a freeware secure file deletion tool for Windows. The goal here is simple: to ensure that files which are deleted cannot be recovered. This privacy-friendly program for Window does not have a GUI. It is not a command-line utility either.

It is a shell-utility. Once you've installed the program, open Windows Explorer and navigate to the location of the file or folder that you want to shred. Right-click on it to view the context menu. A new option should be available that says "Securely Delete". 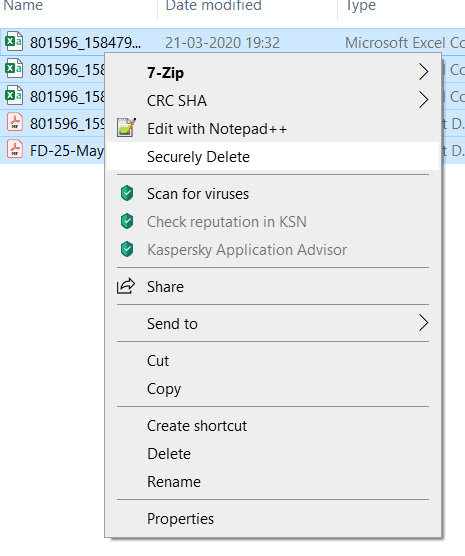 Click on it, and a small window will pop-up asking you to confirmation the deletion. Choose Yes to proceed. DeleteOnClick displays a bar to indicate the deletion progress. It is quite slower than the normal shift + delete command. The bigger the file size of the files or folders, the longer it takes for them to be deleted.

According to the official documentation of the software, DeleteOnClick uses the U.S. DOD 5220.22-M standard as part of its deletion algorithm to ensure that the files cannot be recovered. A quick search tells me that the use of this standard was banned in some U.S. government agencies. Well, I think that speaks volumes about its reliability, wouldn't you agree? Essentially the algorithm overwrites the deleted data with zeros and ones (0s and 1s) to prevent the file from being recovered.

DeleteOnClick is not a portable software. A commercial version of the program is available that offers additional features such as wiping file dates, attributes, renaming files before deletion, securely wiping free disk space.

DeleteOnClick does its job of file secure deletion well, but the fact that several useful features are locked behind a paywall is a bit disappointing.  It could be useful if you want to delete files from a hard drive or memory stick before you dispose it, though I'd recommend using a tool that can also overwrite the free disk space. That is perhaps the one feature I think would improve the free version greatly.

You can check out other secure deletion programs for Windows such as PermaDelete, FileWing Shredder, or My Disk Wiper which erases all data on disks securely.

I have stated this in other articles, but don't use such software (shredders or defrag tools) with SSDs, just enable the TRIM feature from the drive's software and use encryption, and you should be good.

Maybe Microsoft should include an option in Windows to delete files securely. What do you think?

Ashwin has been blogging since 2012 and is known among his friends as the go to tech geek. He is a self-proclaimed Android expert, a PS4 and PC Gamer, a Firefox fanboy, a Nintendo aficionado, and an iOS tinkerer
View all posts by Ashwin →
Previous Post: « Set alerts for events and recurring occasions with Date Reminder
Next Post: Bloatbox assists you in removing Windows Apps including some system apps »