Pale Moon is based on the Firefox web browser but specifically optimized for the Microsoft Windows operating system. What sets it apart from Firefox is the fact that its author builds 32-bit and 64-bit builds of Pale Moon by default, optimizes them for Windows, and will keep several existing Firefox features and looks alive.

The browser has gained some popularity as an option to keep true to the Firefox browser itself without having to update Firefox to the new Australis design and layout that Mozilla plans to ship in a couple of months.

Today's release of Pale Moon 24.3.0 introduces another feature that sets it apart. It is now also offered for Intel Atom systems that you find usually in low-end devices such as netbooks. 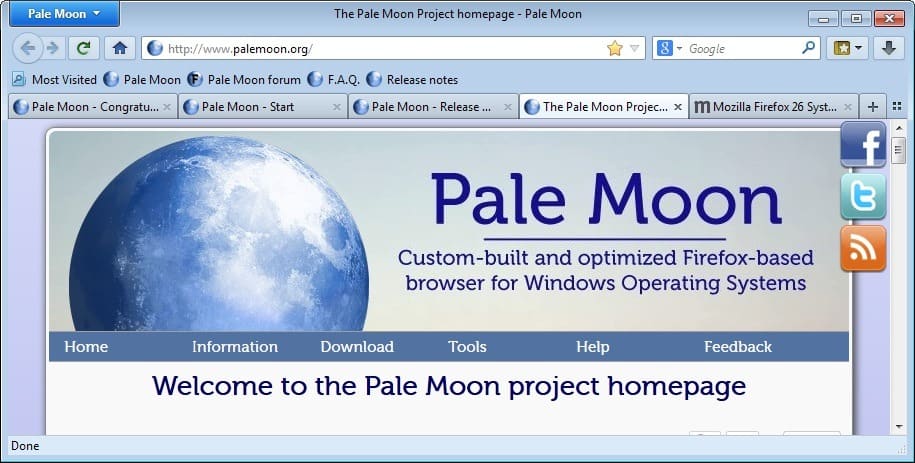 The Intel Atom builds have low system requirements with 256 Megabytes of free RAM and at least 100 Megabytes of free disk space. It needs to be noted that the browser will run better if the system has additional RAM or hard drive space to spare.

Pale Moon's Intel Atom builds are only available in 32-bit and even though they match the same version number as standard Pale Moon builds, are considered in their early stages by their creator.

What this means, among other things, is that they do not ship with automatic updates right now so that it needs to be updated manually instead. The builds can be downloaded from this page.

Another change is the removal of the services tab in the add-ons manager. That does not mean that services functionality has been removed though, only that it is not displayed if no services are installed in Pale Moon at that time. Once you install a service, such as Facebook's for Firefox, you will see the services tab displayed there again.

Last but not least, you will also notice that the navigation bar and toolbars won't be hidden anymore when in tabs on top mode and when internal pages and menus are accessed.

The following bug fixes have already been applied:

The most recent version of Pale Moon can be downloaded as a portable version or setup, for 32-bit or 64-bit versions, from the official project website.