You know that I'm a pretty happy Giganews customer, never had problems with their Usenet service and everything has been top notch ever since I signed up for my first account back in 2005. That's 17 Terabytes of data ago. Giganews has improved and expanded their Usenet service ever since, better retention, faster servers, the Memo usenet client that Giganews customers can use free of charge and VyprVPN, the free virtual private networking service for Giganews Diamond users.

I currently pay $29.99 for my monthly Diamond account. This payment includes unlimited access to the VPN which is very handy for me, as I need access to a VPN anyway. I use it for instance to watch videos on Hulu or listen to Pandora music. It basically allows me to use services in the United States that are only open to US-users.

I have received an email today from Giganews that states they have added to security options, or modules, to their VPN service. Both cost an extra $5 per month but may be very well worth it. The VPN in its core state can be configured to use L2TP/IPsec or PPTP connections.

The first module adds Open VPN support to the mix. The main benefits of the standard according to Giganews are: 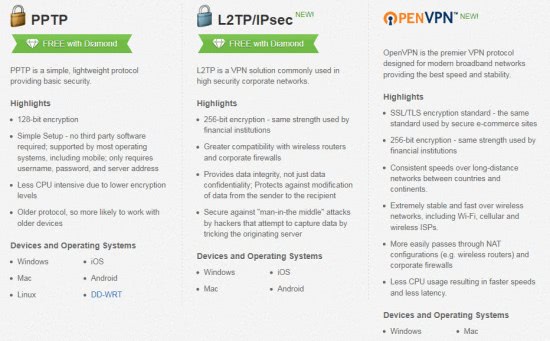 The second option is a NAT Firewall which can be added for $5 as well. This is basically a packet filter that blocks inbound connections before they are able to access the PC. The core benefits are that it does not use PC resources (like a software firewall would) and that it blocks attempts to scan or attack the PC and other connected devices.

VyprVPN customers who order both packages get a 20% discount so that they only pay $8 per month for both services.

Giganews is currently running a promotion for their Diamond accounts (which include VyprVPN free of charge). Users who sign up for a free trial pay $14.99 in the first month and a locked $29.99 afterwards. Customers who sign up after March 31 will have to pay $34.99 for the account per month.

Previous Post: « Radbox, Save Online Videos To Watch Them Later
Next Post: « Your Country Can Only View This Image By Logging Into ImageShack